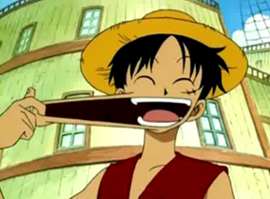 And before you even ask, yes. Yes, it is.

A character with a limited Voluntary Shapeshifting power, that results in his body acting like it is made of rubber. This can be a very versatile ability, as long as the user is creative, and not afraid to look silly. Because of this, it tends to be a power of Fun Personified characters.

Such characters often have powers that work less like having a body with high elasticity, and more like being able to change shape at will. Shaping oneself into rubber balls, balloons and bands, flattening against walls, pretending to be a funny-colored rug, gliding like a parasail, folding oneself into a paper airplane, all totally plausible. He is also resistant to physical attacks since he can stretch out his body to absorb the momentum of the object, and then snap it back as a counter attack. What exactly becomes of one's bodily fluids and organs is, of course, never addressed (unless written by Warren Ellis who explains all for Ultimate Mr. Fantastic).

This power is rarely seen on female heroes. Many people joke about the Power Perversion Potential of men with this ability, assuming that they can apply their stretching powers to body parts ordinary people can't consciously move. At any rate, a sufficiently bawdy writer might point out that stretching and reshaping other appendages could still be greatly appreciated by one's partner.

See also Telescoping Robot. Has nothing to do with the Leather Man, the straw man, or the Slender Man.

Examples of Rubber Man include:

Retrieved from "https://allthetropes.org/w/index.php?title=Rubber_Man&oldid=1892346"
Categories:
Cookies help us deliver our services. By using our services, you agree to our use of cookies.