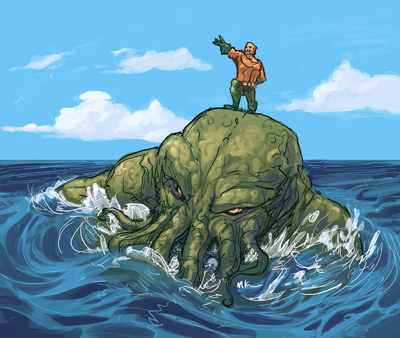 "Command the creatures of the deep" doesn't seem so dumb now, huh?

The character decided to play the Superpower Lottery and ended up somewhere at the bottom of the superpower scale. In the world full of Reality Warpers and Elemental Powers, they won a heart.

What Kind of Lame Power Is Heart, Anyway?

Hey, Heart is an awesome power! Somehow they manage to do Curb Stomp Battles versus Nigh Invulnerable foes. Why?

First of all, they're Badass. Most of the time they're Weak but Skilled. They can also be awesome by analysis by guessing when and how to apply their "useless" power.

Usually a type of skill reapplication: often the power has utilities which no-one but the Weak but Skilled hero recognizes. Sometimes justified with the powers only becoming effective over time, or that they are only effective under certain conditions - however then they pay off handsomely.

Sometimes the character does not realize the usefulness of the skill until later, in which case it is a Chekhov's Skill. Might involve a Chekhov's Classroom on the lines of: "Sure, my only power is to control X... but you forget that Y is X too".

Might be An Aesop to make the most of what you have. Especially ironic if another character had, or could have had the same ability before, but decided that it was useless.

The video game version is usually a Lethal Joke Character, and sometimes Difficult but Awesome. Sister Trope to Lethal Harmless Powers, where normally useful but inoffensive powers turn out to be able to really hurt others. See also the Inverse Law of Complexity to Power, which can be why these powers become useful.

Compare Magikarp Power, which unlike this trope truly is useless at first but eventually ascends to extreme power through hard work and/or patience.

Not to be confused with how the Magical Girl genre tends to treat the "Heart/Love" ability specifically, where it's always something to run away from really fast and never questioned as such except by really horrible and genre-blind villains.

Examples of Heart Is an Awesome Power include:

Retrieved from "https://allthetropes.org/w/index.php?title=Heart_Is_an_Awesome_Power&oldid=1963542"
Categories:
Cookies help us deliver our services. By using our services, you agree to our use of cookies.