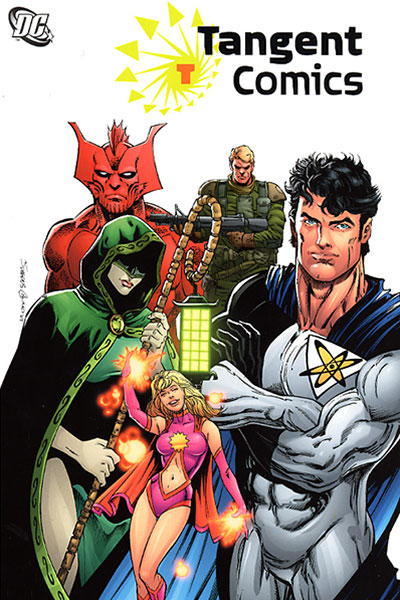 The year was 1997. DC Comics was looking to fill out their schedule for the last week of December. It's tradition to print a series of connected one-shot issues on the fifth Wednesday of the month so to fill that gap, DC turned to the man who killed the Man of Steel, Dan Jurgens.

Jurgens came up with the idea of exploring a brand-new Alternate Universe with some familiar names where the presence of superheroes had had a much bigger impact on history than the standard DCU. This wouldn't be an Elseworld, though: The names would be the same, but the faces, powers, and backstories radically different. The Flash was now a teenage superstar with light powers, for instance, while Green Lantern was a mysterious woman who dealt with ghosts. To hammer home just how different this world was, DC dropped their logo from the covers and created a whole new imprint just for the occasion: Tangent Comics.

The Tangent Universe is a world not too different from our own, at least up until the 1960s. The Backstory goes that in 1962, the world's first super-hero, the nuclear-powered Atom, burst onto the scene, sending America into a super-frenzy and heralding the arrival of other costumed crimefighters. The Atom used his powers to help push the world's science ahead a few years, and by the present, technology is about ten years ahead of ours.

The Tangent Universe is no utopia, though. Around the same time the Atom first appeared, the Cuban Missile Crisis went down... and someone pushed the red button. In a split second, the Cold War turned hot as nuclear warheads streaked back and forth across the Gulf of Mexico, wiping Cuba and Florida off the map. World War III raged for seven years. But America scored an early victory in The Vietnam War, and finally brought the war to an end in Czechoslovakia in 1969, but not until the Russians' deadly Red Tornado bio-weapon killed millions, including the American hero Captain Comet. In the end, both super-powers settle back into another uneasy Cold War, but the possibility that war could erupt again remains very real.

Flash forward to the present day. Print has been almost completely discarded in favor of e-books. Super-celebrities like the Flash and the new Atom keep us safe. The shining city of New Atlantis is has risen from the ashes of old Atlanta, while the mutant Sea Devils lurk in the trenches of sunken Florida. And the shadowy quasi-governmental agency Nightwing, its fingers in everything, keeps one finger poised permanently over the red button...

As mentioned above, the Tangent Universe took familiar names and completely reinvented the characters behind them. The characters introduced in the original round of Tangent books included:

Tangent Comics proved popular enough to warrant a second wave of one-shots the next year, though as a result of going from 38-page issues down to 22, some of the new issues' quality suffered. The Flash, Green Lantern, the Joker, and Nightwing each received a new story, while a few more familiar names popped up:

Running through several of this second wave of stories was a plot that shook the Tangent Universe's foundation: When the rogue Nightwing agents try to rescue the Doom Patrol from the U.S.S.R.'s true leader, the vampiric sorcerer Josef Stalin, the Patrol's members are fused together with a Cosmic Horror beneath the Kremlin called the K.G.Beast (no, really) to create the Ultra-Humanite, a monstrous giant bent on world domination who proceeds to short-out every electronic device in the world. Joker, Superman, and Batman each respond to the aftereffects until the end of JLA, when the Humanite arrives in America and defeats the Secret Six. Superman, Batman, Wonder Woman, Green Lantern, and the original Atom form their own Justice League to combat the menace...

...and that's where the story ends.

It's probable that Dan Jurgens had plans to conclude the storyline with the defeat of the Ultra-Humanite, but it never happened. Tangent Comics was never revisited and the whole world was left hanging.

Flash forward. In 2005, the Tangent Universe was established as part of DC's wider multiverse in a cameo in the Crisis Crossover Infinite Crisis in 2005, but lay fallow afterwards. But finally, in December 2007, the tenth anniversary of our first foray into the Tangent Universe, our Justice League of America stumbles across a paper lantern with strange mystic properties that opens a portal to a whole new world -- nay, universe -- of adventure.

In May 2008, Tangent: Superman's Reign #1 hit shelves as Tangent and The DCU intersected for the first time. We learn that the Tangent Superman single-handedly defeated the Ultra-Humanite, but as he grew more and more disconnected from humanity he realized his new purpose: not to watch over us as a hero, but to rule as a dictator. Using his vast powers to conquer all the world's governments, his rule goes unchallenged... save by a small group of his former friends and Nightwing itself. The heroes of two worlds come together to stop Superman's reign before he can set his sights on another Earth...

Tropes used in Tangent Comics include:
Retrieved from "https://allthetropes.org/w/index.php?title=Tangent_Comics&oldid=1509985"
Categories:
Cookies help us deliver our services. By using our services, you agree to our use of cookies.