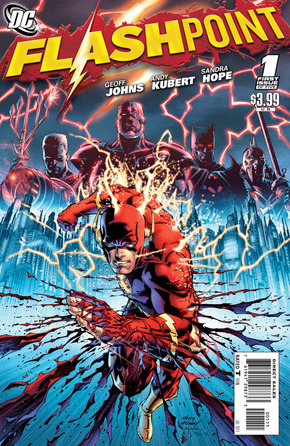 What would you do if you woke up one morning and discovered that everything around you had changed, so much so that even the familiar is so alien, they are almost unrecognizable? And not only that, but this new world is teetering on the brink of superpowered war? This is the world which Barry Allen finds himself in; this is the world of Flashpoint.

Superman is nowhere to be found; in his place, Cyborg is the world's greatest hero. Likewise, Barry's enemy Captain Cold -- or rather, Citizen Cold -- has filled his spot as Central City's protector. Hal Jordan never became Green Lantern; Abin Sur remains the protector of Sector 2814. Batman is uncharacteristically brutal. And most pressingly, Wonder Woman is at war with Aquaman with the former conquering the United Kingdom and the latter sinking the rest of Western Europe into the sea; if left unchecked the Amazons and Atlanteans will devastate the world.

Flashpoint is a Crisis Crossover published by DC Comics, written by Geoff Johns and penciled by Andy Kubert; the series details an altered DC Universe in which only Barry Allen seems to be aware of very significant differences between the regular timeline and the altered one he awakes in. Consisting of a limited five issue run, the series will also involve sixteen 3-issue mini series, four one-shots, and a tie-in arc in Booster Gold. It was preceded by four issues of "The Road to Flashpoint" in The Flash #9-#12. This event led to a complete relaunch of the DC universe starting with Justice League #1 on August 31st 2011.

Not to be confused with the TV show nor the Elseworlds story of the same name (though that also involves the Flash).

Tropes used in Flashpoint (comics) include:
Retrieved from "https://allthetropes.org/w/index.php?title=Flashpoint_(comics)&oldid=1790560"
Categories:
Cookies help us deliver our services. By using our services, you agree to our use of cookies.