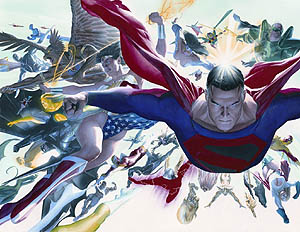 A DC Universe & Elseworlds graphic novel, published in 1996. Written by Mark Waid and beautifully painted by Alex Ross, Kingdom Come depicts a dystopian future in which Superman has retired due to the public's preference for heroes who will use lethal force. The Silver Age superheroes followed him, in some cases retiring completely, in others sticking to their own small areas.

Until a tragedy strikes in Kansas. The death of Captain Atom causes a nuclear explosion which destroys most of the Midwest of the USA. This loosens the last bounds of restraint among the new generation of metahumans, who begin to fight one another with abandon. Superman returns, reassembles the Justice League and tries to take back control, with dire consequences.

Through it all, a simple pastor named Norman McCay is guided by apocalyptic imagery drawn from the Book of Revelation and by The Spectre. He must decide the fate of humanity - whether to allow the metahumans to be killed en masse and save the rest of humanity, or to allow them to survive, but doom the world.

Tropes used in Kingdom Come include:
Retrieved from "https://allthetropes.org/w/index.php?title=Kingdom_Come&oldid=1748904"
Categories:
Cookies help us deliver our services. By using our services, you agree to our use of cookies.