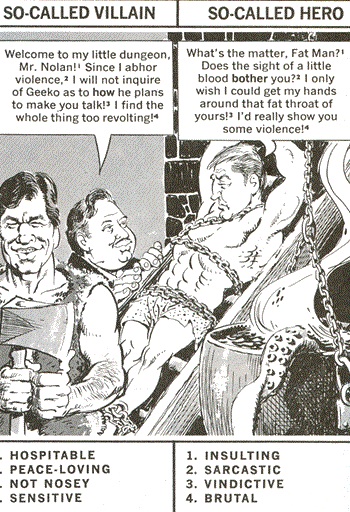 Sometimes Good Is Not Nice, hence a hero can be obnoxious and rude. Similarly, sometimes an Affably Evil villain could be friendly or polite. When either or both of these work their way into to the tone of a conversation between a hero and a villain, you end up with conversations in which the villains sound more respectful than the heroes.

Depending on how this is treated in the context of a story, it could serve as a Pet the Dog moment, or alternatively, it could serve as a sign that the villains really, REALLY don't deserve respect and hence the heroes will not give it to them. Then again, that would by its very nature imply the villains at least humble enough to be polite to the heroes... or at least not too proud to pretend to be.

Retrieved from "https://allthetropes.org/w/index.php?title=Polite_Villains,_Rude_Heroes&oldid=1970605"
Categories:
Cookies help us deliver our services. By using our services, you agree to our use of cookies.