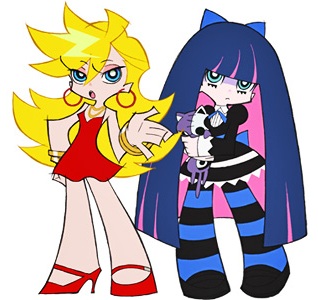 Our heroines. God help us all.

Evil creatures called Ghosts are attacking Daten City, a city located on the border of Heaven and Hell, so Heaven sends down two angels (who also happen to be sisters) to stop them. One is an incredibly promiscuous blonde who can turn underwear into guns. The other is a gothic girl with an eternal craving for sweets who can turn stockings into swords. Guided by Father Garterbelt, a black priest with an afro and a variety of sexual fetishes, and their dog Chuck, they fight ghosts in incredibly sexy, exciting, and just plain old weird ways.

Panty & Stocking with Garterbelt is an anime created by Gainax for the autumn 2010 season. The anime is drawn in a strange Powerpuff Girls-esque style, and is probably the weirdest show Studio Gainax has ever produced, possibly weirder than even FLCL (and that is really saying something), though some say it's on par with Dead Leaves.

After its obligatory Gainax Ending, a second season was confirmed...well, sorta. At this point it's really up to Imaishi. FUNimation has also licensed the show with an English dub which is considered better than the original.

This page comes with its own character sheet and list of shout outs.

Tropes used in Panty & Stocking with Garterbelt include:
Retrieved from "https://allthetropes.org/w/index.php?title=Panty_%26_Stocking_with_Garterbelt&oldid=1962707"
Categories:
Cookies help us deliver our services. By using our services, you agree to our use of cookies.