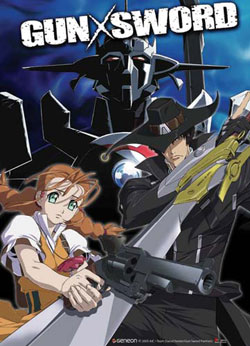 On the planet Endless Illusion, a tall, lanky man in a tuxedo walks into a building. He sees a young girl with a gun fighting a group of thugs, up until one takes her down. The man grabs his belt, which turns into a sword as he removes it, and wipes the floor with the thugs one after the other.

And then he faints from hunger.

The man in the tuxedo is known as Van (just Van, although he has a long list of nicknames). Three years ago, a man with a claw for a right arm killed Van's bride on his wedding day, and ever since Van has hunted him down. His tools for the job are his collapsible sword and a Humongous Mecha, Dann of Thursday, which comes down from space at his bidding.

The girl is Wendy Garret, and her older brother Michael was kidnapped by a gang at the Claw's behest. She promptly attaches herself to Van, much to his dismay, and accompanies him on his hunt for the Claw. She brings along her gun (given to her by Michael), her luggage, and a pink turtle named Kameo.

As it happens, they aren't alone for too long - an information broker named Carmen99 (real name Carul Mendoza, but don't call her that) soon insinuates herself into the group, at first for profit but then because It's Personal. Also latching onto their company is Joshua Lundgren, a mechanical prodigy with little in the way of social graces, whose older brother Ray also seeks to kill the Claw as vengeance for his wife's death.

Nothing is as simple as it seems, though, for The Claw has many allies and a great deal of power. And his plans reach into the very history and purpose of Endless Illusion itself.

While on first glance the series looks like (and is occasionally described as) "Trigun with giant robots", this is a grievous oversimplification. The series takes a few episodes to get started, but is amazingly well-constructed (with almost nothing in the way of Filler), and comes to an excellent conclusion. This is also one of the very, very few shows that the mecha board of 4chan (where a large number of the Humongous Mecha otaku gather) nearly unanimously have little to no complaints about.

Unfortunately for American viewers, the series was brought out by Geneon. While it was entirely released, anime fans had a hard time finding it for awhile. In 2010, FUNimation picked up the rights to the series. Subbed episodes are being released on their video portal, and the series has been re-released as a box set. It is also currently available online via Netflix.

Its name has absolutely nothing to do with shipping a Crack Pairing. Honest.