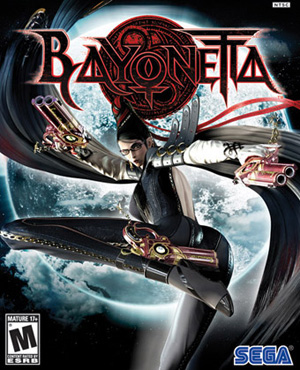 Bayonetta is a third person action Beat'Em Up in the style of Devil May Cry, Ninja Gaiden and God of War, starring the title heroine, a Badass witch with epic hair, guns on her feet, and a fathomless fondness for Camp.

The plot is as follows: Bayonetta is an Umbra Witch, the (almost) last of a clan that pledges their soul to demonic power so they can fight against the angelic beings of Paradiso. Waking up from a five-hundred year sleep and seeking her lost memories, she travels to the European city of Vigrid, whose spiritual make-up is getting uncomfortably close to that of Paradiso. There, she hopes to find the mysterious "Right Eye", the other half of the "Eyes Of The World" broach she possesses. There she meets another Witch named Jeanne who seems to know more about Bayonetta than herself, an Intrepid Reporter named Luka who has a long-lived grudge against her and a seemingly lost little girl named Cereza. Her memories return progressively as she proceeds through the city while kicking a lot of ass.

Its unabashedly sexual themes caused some amount of controversy, but the fact that the game was developed by the formerly dissolved Clover Studios (now reassembled as Platinum Games) and the director of Okami (with which Bayonetta shares a character designer, Mari Shimazaki), Devil May Cry, Resident Evil 2 and Viewtiful Joe piqued the interest of many gamers who might otherwise have taken a more cynical stance on the matter.

The Xbox 360 version received rave reviews, even becoming only the 12th game to ever be awarded a perfect 40 score in Famitsu and the eleventh to receive 10/10 in Edge. The Play Station 3 version has suffered porting issues and has received solid, but not glowing reviews. Spoilers will be marked when possible, but there are still some unmarked spoilers.

Not to be confused with Bullet Witch. Nothing to do with Bayonet Ya either.

Tropes used in Bayonetta include:
Retrieved from "https://allthetropes.org/w/index.php?title=Bayonetta&oldid=1930561"
Categories:
Cookies help us deliver our services. By using our services, you agree to our use of cookies.