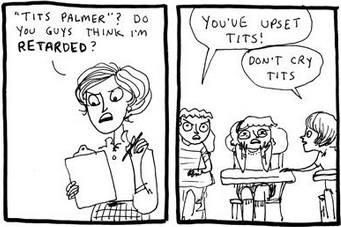 Two characters are being introduced to each other for the first time. However the first introductee has a really wacky name; for example, he is a businessman called "Mr. Moneygrabs". The other character feels compelled to laugh, thinking that it is a joke. However, it is not. It is, as it is pointed out, a long running and respectable family name.

(This often happens in Real Life to people who happen to share a name with a famous person.)

May overlap with It Is Pronounced "Tro-PAY". See also Who's on First? Compare Mistaken for An Imposter.

Examples of Real Joke Name include:

Caller: [on the phone, politely] Morning, the swan's escaped.
Angel: [looking around the office, certain it is a prank] The swan's escaped. Right, and where has the swan escaped from, exactly?
Caller: The castle.
Angel: Oh yeah, and who might you be?
Caller: Mr. Staker. Mr. Peter Ian Staker.
Angel: [annoyed] P.I. Staker? Right, PISSTAKER! COME ON!!
[Gilligan Cut to Angel, standing outside a castle in front of Mr. Staker]
Angel: Yes Mr. Staker, we'll do everything we can.

And the kids are no better: only last week Dirty Lying Little Two-Faced came running home from school, sobbing his eyes out, and their youngest, Ghastly Spotty Horrible Vicious Little is just at the age when taunts like 'she's a git' really hurt.

Dong-Suk: (Voice Of Translator) Every precaution has been taken. Ok, stop laughing! I come from a long line of Dong-Suks! You can't go anywhere in this country without running into a Dong-Suk! Stop it! Hey, do you know what "Mike Williams" means here? It's a lot worse than "Dong-Suk", I can tell you that!

You give me a gun, you drop me into "Abadabad" or whatever they call their cities over there, I'll give him a shot, I'll go to Abadabad and I'll shoot him in has Abadabadabingos, you know what I'm talking about?

Homer: See, I got this friend named Joey...Joe Joe...Junior Shabadoo...
Moe: Homer, that's the worst name I ever heard.