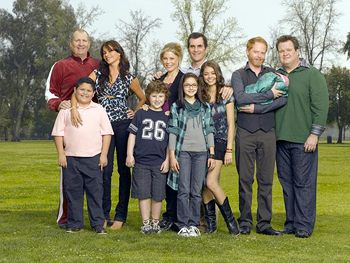 Modern Family is an ABC sitcom that centers on three families:

The Dunphys, traditional two-parent, three-child set with Ty Burrell as Phil aka the "cool dad", and Julie Bowen as Claire, an overprotective mom and Former Teen Rebel. Their kids are Haley, Alex, and Luke.

The Pritchetts, a May-December interracial couple: Ed O'Neill as the 60-something Jay married to the 30-something Gloria (played by Sofia Vergara), with an 11-year-old stepson, Manny.

At the end of the pilot, it's revealed that all three families are related (Claire and Mitchell are Jay's children from a past marriage) and cross over into one another's stories. Episodes tend to rely on standard family comedy tropes and plot lines, in a modern setting. The show uses the Docucomedy format popularized by The Office, and to great effect. But despite all these gimmicks, Modern Family's greatest strength is its excellent writing and acting.

When it began its first season, Modern Family quickly reached both critical acclaim and very high Nielsen numbers, becoming one of the best new comedies of 2009. Because of this success, the program has become the flagship title of ABC's Comedy Wednesdays along with Cougar Town and The Middle. Modern Family is currently running on its third season.

Tropes used in Modern Family include:
Retrieved from "https://allthetropes.org/w/index.php?title=Modern_Family&oldid=1928328"
Categories:
Cookies help us deliver our services. By using our services, you agree to our use of cookies.