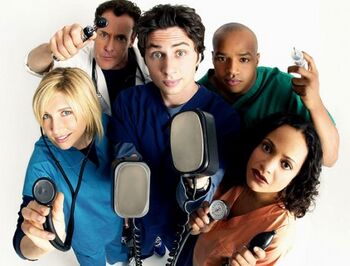 The lead characters are about to tack you up.

John "J.D." Dorian trains and works at Sacred Heart hospital, learning the difference between studying medicine and being a doctor, as well as how being a person can differ from both. His guide through much of this is Dr. Perry Cox, an acerbic, sharp-tongued and profoundly bitter attending physician with a terrible personal, professional, romantic and social life but a genuine desire to help his patients.

Other people in the hospital provide contrast, support, and the more-than-occasional weird situation: J.D.'s long-time Black Best Friend Dr. Chris Turk, a surgeon who tries to be the best and blackest thing since burnt sliced toast; nurse Carla Espinosa, the Team Mom to the staff with a penchant for delivering advice whether you like it or not; Dr. Elliott Reid, J.D.'s (female) on-again, off-again love interest and possibly the only doctor on staff more nerdy and psychologically messed-up than he is; Dr. Robert "Bob" Kelso, the hospital's Chief of Medicine and Magnificent Bastard of a boss whose job requires him to be a heartless bastard and think only of the hospital in fiscal terms; and "Janitor", a mysterious and often menacing presence in J.D.'s life who has taken the role of his nemesis.

The show uses rapid-fire dialogue, a running mental commentary in J.D.'s head for narration, rapid scene changes, hippocratical humor and a single-camera viewpoint to maintain a high energy to the story and to the comedy. The show also takes quite a few dives into the surreal end of the pool, especially in its frequent depiction of J.D's fantasies. These fantasies provide much of the show's humor, as it deals with the often bizarre train-of-thought and overly literal depictions of metaphors people use.

Scrubs became well known for it's focus on Character Development, the extensive supporting cast and recurring characters, the largely accurate medicine and politics surrounding it and paying attention to the gradual progression of the careers of the young doctors (how they go from interns to residents to attending physicians and eventually department heads).

Scrubs spent its first seven seasons on NBC, but moved to ABC for its eighth campaign. That season ended with what was thought to be the show's Grand Finale, an episode whose end credits were played alongside footage of the cast and crew tearfully saying goodbye to each other. But in a surprise move, ABC picked up Scrubs for yet another season; this resulted in a Post Script Season set at New Sacred Heart, a teaching hospital. Though Turk, Dr. Cox, Dr. Kelso and J.D. all showed up (the latter for only 6 episodes), the focus was on a new group of interns, with intern Lucy Bennett largely replacing J.D. as narrator. The show officially ended after the Season 9 finale.

Scrubs is the Trope Namer for:
Tropes used in Scrubs include:

Retrieved from "https://allthetropes.org/w/index.php?title=Scrubs&oldid=1965507"
Categories:
Cookies help us deliver our services. By using our services, you agree to our use of cookies.