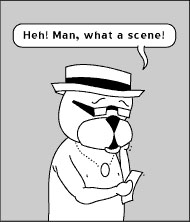 Achewood is a critically acclaimed and very adult comic by Chris Onstad, originally about the adventures of his stuffed animals (straight-man Teodor, refined Cornelius, sweet-natured young Philippe and violent boozer Lyle), which expanded to include, and was eventually taken over by, the neighborhood cats (ideas man Ray, and clinically depressed Roast Beef).

The comic is confrontational on just about every level; very sexually explicit, laden with drug references and moments of harsh violence. It also features many episodes which are disturbing in a more psychological manner, such as Ray's and Roast Beef's bizarre encounters with freakish performance artist Cartilage Head, or an occasion where a character dies only to discover that heaven has burnt down. At the same time it can be surprisingly good-natured, and deals quite sincerely on such subjects as friendship, self-esteem and commitment, and is literate about matters like fine food, multi-lingual palindromes and gay porn. It's also, if you're in the right mood, often very, very funny.

A special mention must be made of the dialog, which is often downright poetic. Onstad seems to coin brilliantly memorable phrases on a near-daily basis at times, and every character has a unique and unmistakable speech pattern. It's helped make Achewood something of a darling among literary critics, receiving high praise from the likes of The New Yorker and Time. However, the wordplay often depends heavily on Genius Bonus, and Onstad occasionally seems to go out of his way to make his slang indecipherable. Whether this improves the comic or distracts from the story is debatable.

Has a much more expansive world than most webcomics. In addition to the comic, Onstad maintains blogs for twelve of the characters, runs an Achewood radio station, and puts out cookbooks with original recipes by the characters, many of which are completely edible.

Can be read here. If you'd like to skip the comic's Early Installment Weirdness, start here instead. For the Wham! Episode Cartilage Head storyline, read here. And for the Great Outdoor Fight, which was published as a standalone hardcover comic by Dark Horse, start here (and read on - the storyline takes a while to get going).

The strip went on a hiatus of sorts [dead link] for much of 2011, but seems to have finally returned.

Tropes used in Achewood include:

"Why can't I wake up with the gin already in me?"

Ray: Man, our drink has a PASSWORD? That is JAMES BOND IN A TOWEL!