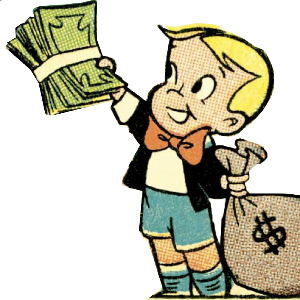 For some reason, sibling series Proletariat Pete didn't do so hot. Even in Soviet Russia!

Richie Rich, often billed as "The Poor Little Rich Boy" and frequently styled as "Ri¢hie Ri¢h", debuted in 1953 as a backup character in the Little Dot comic book. He soon became Harvey Comics' flagship character, appearing in as many as 32 Harvey titles monthly and often crossing over with Casper the Friendly Ghost (refuting later speculation on The Simpsons that Casper was actually Richie's ghost). His stories usually centered around his attempts to be an ordinary boy having fun with friends despite being screamingly rich and not always knowing how to act when outside of his social stratum.

Adaptations of the comic naturally ensued: two Animated Series (a 1980 production by Hanna-Barbera and a 1996 syndicated show), a 1994 feature film which was followed by the Direct to Video Sequel Richie Rich's Christmas Wish (1998), and a live-action sitcom which has been running on Netflix since 2015.

Tropes used in Richie Rich (comics) include:
Retrieved from "https://allthetropes.org/w/index.php?title=Richie_Rich_(comics)&oldid=1894597"
Categories:
Cookies help us deliver our services. By using our services, you agree to our use of cookies.