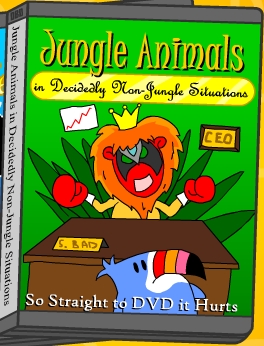 Simply put, this is the practice of skipping theaters/television and just going straight to home video as the first release. This is generally not a good sign in terms of quality (especially if it was originally going to be released theatrically, but was consigned to video), the term "direct-to-video" or "straight-to-video" often gets used as slang for "cheaply made, rushed, low quality", and in extreme cases, "complete bucket of crap."

In the United States, while there have been plenty of direct-to-video films and such since the advent of home video, they were usually things that were considered financially unsound to release in theaters, like instructional videos, specialized documentaries, films with controversial or niche subject matter (including many foreign films), or pornography. The practice of creating and releasing regular fiction specifically for video didn't really take off until 1994 with Disney's Return of Jafar and Universal Studios' The Land Before Time II, neither of which was intended to hit theaters at any point in its production.[1] Other studios started following suit, hardly limited to child-oriented animation. In particular, independent studios and filmmakers quickly picked up on this distribution model, due to its lower distribution costs and reduced censorship (video stores will often stock unrated films that theaters won't touch).

Internationally, many films that had a theatrical release may be released Direct to Video in other countries.[2] This may be due to several factors.

There is a distinct business model that drives the direct-to-video industry, particularly when it involves lower-quality films. One might think that churning out mediocre-to-bad movies on purpose would be a dumb idea, until one looks at the sales and rental figures. A cheap 70- to 90-minute film can be produced for as little as a few thousand dollars if you hire obscure actors, crew and writers (often non-Unions in Hollywood, and barely getting minimum wage), everything gets shot around the studio, and nothing is required that can't be obtained from the studio's stock wardrobe and props. The studio then usually makes about $3–5 million off this, most of it from sales to rental chains. It floods the market with tripe into which nobody put any true effort, but it still makes money in the long run. It's the modern equivalent of the B-Movie; in fact, many of these would be B movies if double features were still a regular thing. Some direct-to-video flicks will try to make lemonade of their lemons by claiming that their movie is "too intense", "too scary", "too well-written" or "too lavishly budgeted" for theaters, usually the viewers don't fall for it.

Sometimes, things that were originally intended to be Direct to Video end up getting retrofitted to show on television or in theaters. Usually, only some minimal editing is done to make it fit for theaters, but there have been cases where the project was intervened midway and beefed up to make it quite a bit better. An example of the former is Doug's First Movie, which was put into theaters after the success of The Rugrats Movie. A famous example of the latter is Toy Story 2, on which Pixar expanded tremendously for its theatrical release, along with another Disney film, Recess: School's Out. More recently, Honey 2 - intended as a Direct to Video movie (which is still the case in North America) got a European theatrical release first... and no, Jessica Alba did not return.

In Japan, OVAs follow the same model of distribution, but have the opposite expectations in terms of their quality. With larger budgets and without Executive Meddling or the strict requirements of the Media Watchdogs, OVAs are expected to be significantly better than television-based anime. Live-action direct-to-video, known as "V-cinema" overseas (although this is technically a trademark of Toei Company), also has a much better reputation in Japan. This is due mainly to the number of established filmmakers who use it for their more "experimental" or unusual work, enjoying the greater creative freedom and lack of censorship.

In short, while "direct-to-video" means "too bad for theaters" in the West, OVA means "too good for a TV series" in the East.

In a further expansion of the phenomenon, it has become increasingly common for Missing Episodes of shows that were canceled early to first see the light of day on the home video release.

Now that video streaming services are taking the place of home video releases, a similar phenomenon is taking place there. As the first Netflix Original series were incredibly good, but its Original Netflix Movies tend to be of mediocre quality, streaming service-exclusive series tend to be qualified as "too good for mainstream TV and cable but too quirky for even HBO", but movies that go direct to those services are seen the same way as Direct-to-DVD films were (a perception that not even cases like Roma and The Irishman, who had brief runs in streaming services before premiering in theaters and getting critical acclaim, has completely shakin off).

Retrieved from "https://allthetropes.org/w/index.php?title=Direct_to_Video&oldid=1750375"
Categories:
Cookies help us deliver our services. By using our services, you agree to our use of cookies.