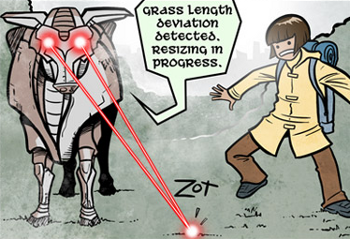 Laser cows! They keep the grass trim. Just like real cows! Only with lasers.

Sufficiently humanoid robots will have super-strength and other fantastic abilities. It doesn't matter what they were built for.

Sometimes, the robot doesn't even need to be humanoid. Relatively simple non-human robots that perform mundane jobs also seem to be way overpowered and/or over-armed for their designed tasks. A robot designed to do nothing but wash windows will undoubtedly also have enough power to batter though a concrete wall if it has to.

This is especially true for Replacement Goldfish; something that's designed to emulate a cute 6-year-old boy will undoubtedly have lasers, rockets, and invulnerable titanium armor. Fortunately, this often allows them to become a Superhero. (This may, though, just be their creator's way of ensuring that the replacement does not perish in the same kind of tragic accident that took the original.)

This may be explained by it being easier to take something that's built to do industrial work and make it look like a human than build something that's as weak as a human from the ground up; however, few series come out and say this. Perhaps justified in that even robots not specifically designed to have super-lifting capabilities would have greater strength than humans because most metals are stronger than human muscle; their inability to feel pain or fatigue would also give them unlimited stamina. May also become a Truth in Television; looking at many other forms of technology with extraneous doodads, the question doesn't seem to be "Why?" but "Why not?"

It may also be justified if the robot has a secondary function as an inconspicuous bodyguard—not many attackers would expect the hired help to be able to toss them out the window. Or be packing miniguns designed for military vehicles, for that matter.

This makes them a threat when acquiring an Artificial Intelligence, or struck by lightning.

Contrast Mundane Utility, which instead of featuring meter maids with the firepower of mecha, has mecha with the job description of meter maids.

Retrieved from "https://allthetropes.org/w/index.php?title=Super-Powered_Robot_Meter_Maids&oldid=1883586"
Categories:
Cookies help us deliver our services. By using our services, you agree to our use of cookies.