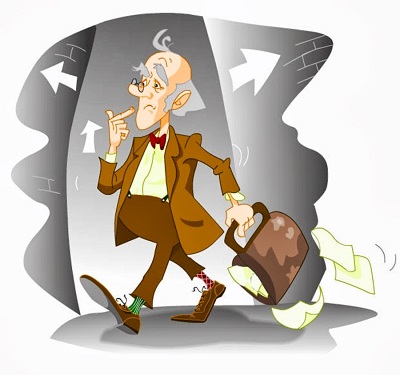 Now where did I leave that page image? I'm sure it was around here somewhere...

This Stock Character is a brilliant scientist, but very flighty, often forgetting things like the date, people's names, meetings, eating, people's names, etc. Good thing he (and it's very often a he) is good at what he does and often has perfect memory for scientific details or mathematical values. Sometimes he becomes so engrossed in his work that he loses track of his very surroundings.

This is a very old character type, referred to by this name since at least 1864.

A subtrope of The Professor. Compare also... um... blast it! ...ah yes, the Mad Scientist, who often exhibits this trait. I do so only reluctantly. And of course, I must mention my colleagues in the math department. Some of them go a bit beyond absent-minded, though.

Now if you'll excuse me, I must nip on home, as I seem to have forgotten to put on my pants. Ah, the hair? Oh, yes, I should try to comb it some time... I do have a comb, don't I? A Sub-Trope of... oh, yes, Forgetful Jones. Compare with Attention Deficit Ooh Shiny.

(And they leave for the street.)

Hmm... I know there's something to do with games and tabletops... Oh yes! Tabletop Games!

...What am I doing here again?

Retrieved from "https://allthetropes.org/w/index.php?title=Absent-Minded_Professor&oldid=1877577"
Categories:
Cookies help us deliver our services. By using our services, you agree to our use of cookies.