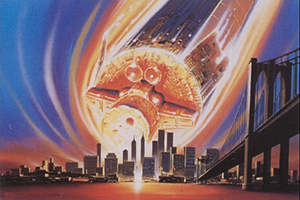 The Space Age equivalent of dropping a house on a witch.

One of the most dramatic ways to try and bring about The End of the World as We Know It. Put simply, just set any sufficiently large object on a course toward the Earth, and make sure you're off-world when it hits. Or not, if you don't care about surviving it or you're already going to be dead when it happens.

The sky literally falling has a way of pushing the story quickly past the Godzilla Threshold. It most likely will require Applied Phlebotinum to stop, or a large amount of firepower, thus it's also one of the few cases where the Nuclear Option is acceptable.

Most often done with asteroids, but very large space colonies often show up, too, and provide the added drama of allowing both populations to witness their imminent doom.

If this is done deliberately by a villain, he will usually warn the world in advance (through their TV sets), so as to give the good guys time to avert it.

Note that in real life, the colony and moon version of this is very, very difficult. It's nearly as hard to take something out of orbit as it is to put it in in the first place, as all the momentum must be shed. The energy necessary to do this is actually more than will be released in the collision.

An example of Death From Above. You Can See the Explosion from Orbit, and in certain circumstances there's an Earthshattering Kaboom. Even a successfully halted colony drop can be the source of an Inferred Holocaust.

Not to be confused with a "Galaxy Drop" from PlanetSide, where the dangerous payload is merely a platoon of armed troopers and vehicles dropped from a fleet of Galaxy transports.

Examples of Colony Drop include:

The majority of the asteroids sent to the players' planet arrive around the time the game starts being played, or April 13, 2009 in the case of Earth, which amounts more or less to the end of the world; the entire point is to end mankind as Earth has served its purpose. All of the player's homes in particular are menaced by an incoming meteorite, requiring them to enter the game and start the adventure before it strikes; the largest one menaced Jade's home somewhere in the Pacific Ocean shortly before she entered, and Becquerel's blast to destroy it had to be so powerful that its nuclear shockwaves were more or less the last nail in the coffin for Earth.

Retrieved from "https://allthetropes.org/w/index.php?title=Colony_Drop&oldid=1859678"
Categories:
Cookies help us deliver our services. By using our services, you agree to our use of cookies.