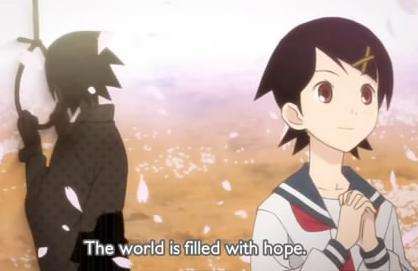 ...And a guy trying to make himself taller.

"With kindness comes naïveté. Courage becomes foolhardiness. And dedication has no reward. If you can't accept any of that, you are not fit to be a magical girl."
—Homura Akemi, Puella Magi Madoka Magica

A character who is far too idealistic for his or her own good.

It may be the Naive Newcomer who Jumped At the Call—he or she has a huge stack of comic books/movies/bards' tales, and thinks they're pretty Genre Savvy. Unfortunately, their universe is more toward the cynical end of the Sliding Scale of Idealism Versus Cynicism than the stories they know. Alternatively, they might just be generally nice people whose idealistic attempts at solving the problems of their world turn out to go horribly horribly awry as no one else plays by their rules. Usually used as nothing more than a device to highlight the realism/grittiness/cynicism of the setting.

This character either becomes a victim of Trauma Conga Line or Break the Cutie, dies horribly or acquires a coat of jade post-haste. In particularly Anvilicious cases, expect deployment of Diabolus Ex Machina to deal with them.

If the character remains triumphant and idealistic throughout, then it's a case of Good Is Not Dumb or The Pollyanna. May also be Stupid Good.

While messiahs are frequent victims of wide-eyed idealism, their suffering or sacrifice can encourage them to become full-blown Messianic Archetypes and inspire others in the setting to lighten up and thereby change the setting, unless they're a different kind of messiah, in which case the setting is only cemented.

When The Hero appeals to a group of people, often Least Is First falls under this.

Compare The Pollyanna, the Love Freak, The Ingenue, and Silly Rabbit, Idealism Is for Kids Contrast the Grumpy Bear, the cynic in an idealistic setting. See Turn the Other Cheek and The Farmer and the Viper.

Examples of Wide-Eyed Idealist include:

Havoc: He's stupid! How can such a naive thing keep climbing up in this country?
Hawkeye: I think it's good that there are idiots like that, once in a while.

"O sage Pangloss," cried Candide, "what a strange genealogy is this! Is not the devil the root of it?"
"Not at all," replied the great man, "it was a thing unavoidable, a necessary ingredient in the best of worlds; for if Columbus had not caught in an island in America this disease, which contaminates the source of generation, and frequently impedes propagation itself, and is evidently opposed to the great end of nature, we should have had neither chocolate nor cochineal."

Thrawn: There are all too few idealists in this universe, Car'das. Too few people who strive always to see only the good in others. I wouldn't want to be responsible for crushing even one of them.
Car'das: And besides, you rather liked all that unquestioning adulation coming your way?
Thrawn: All beings appreciate such admiration.

"Alone of us all, Rinaldo has no personal ambition. He sees in Conan a red-handed, rough-footed barbarian who came out of the north to plunder a civilized land. He idealizes the king whom Conan killed to get the crown, remembering only that he occasionally patronized the arts, and forgetting the evils of his reign, and he is making the people forget. Already they openly sing The Lament for the King in which Rinaldo lauds the sainted villain and denounces Conan as 'that black-hearted savage from the abyss.' Conan laughs, but the people snarl."
"Why does he hate Conan?"
"Poets always hate those in power. To them perfection is always just behind the last corner, or beyond the next. They escape the present in dreams of the past and future. Rinaldo is a flaming torch of idealism, rising, as he thinks, to overthrow a tyrant and liberate the people."

"For example, a new angel performing a mission in modern-day America knows that interstate buses are a method of transportation, and that they begin and end their trips in metropolitan bus stations. ... Bur the angel is unlikely to realize that it's a bad idea to spend the night in a bus station, or that the nice man who offers to watch your luggage while you get a drink won't be there when you get back (and neither will your luggage)." -- APG, pg. 80