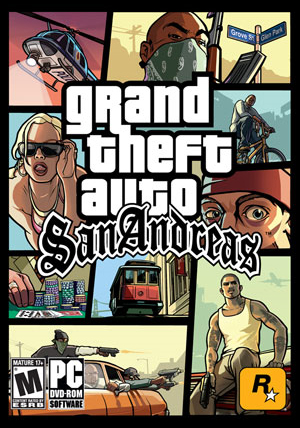 The original Grand Theft Auto had three cities: Liberty City, Vice City and San Andreas. San Andreas was the last of these to feature a game of its own, and was expanded into an entire state. San Andreas is a Fictional Counterpart for California, with some elements from Nevada. It has three major cities: Los Santos, San Fierro, and Las Venturas. It also has nearly a dozen small towns, and loads of land in between them.

The game puts the player in the shoes of Carl "CJ" Johnson, a good guy, relatively speaking, a first for the series. CJ is a gangster who left the city of Los Santos, San Andreas after his brother was killed, but is returning home after a five-year stint in Liberty City to bury his murdered mother.

Shortly after arriving, corrupt cops Frank Tenpenny (Samuel L. Jackson) and Eddie Pulaski (the late Chris Penn) pick him up and force him to work for them. If CJ refuses, he will get framed for cop killing, a killing for which these cops themselves are responsible, as the unlucky officer was going to expose them. But that's just part of it. CJ gets thrown around a twisted world of crime all over San Andreas with many twists, betrayals and surprises, as well as unexpected cameos from quite a few familiar faces.

San Andreas's reception was like pretty much every other 3D Grand Theft Auto game. In other words, it was received with a hell of a lot of love from gamers. While not without controversy (the Hot Coffee Minigame scandal was especially idiotic), it enjoyed overwhelmingly positive reviews by critics and fans alike, and has made millions in sales. Even after the release of Grand Theft Auto IV, many fans still consider San Andreas to be their favorite game in the series. One reason for this is because of its absolutely huge sandbox area: three full cities and numerous towns and countryside areas, as opposed to the other Grand Theft Auto games which were positively claustrophobic by comparison. Even as the games moved into the next-generation consoles, allowing greater realism in how cities are depicted, to date none of the games that followed San Andreas have equaled the scope and sense of distance offered by this game.

Fans of the game may want to check out this Let's Play told almost entirely from CJ's perspective, which fleshes out the story and fills in some plotholes.