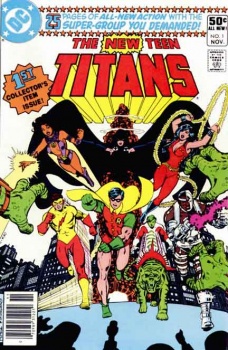 The most famous team of teenage Super Heroes in The DCU (but not the first). Often referred to as a "Justice Little League," though more often as a "Junior Justice League."

The original series began back in the Silver Age, with a one-shot story in The Brave and the Bold #54 (July, 1964), where three Sidekicks, Robin, Aqualad, and Kid Flash, teamed up. The issue sold notably well, and, after a few more tryouts and the addition of Wonder Girl (despite her actually being the original Wonder Woman as a girl, and not a contemporary sidekick) and Speedy, became an ongoing series.

The book depended heavily on Totally Radical, with Fad Super villains like the Mad Mod and Ding Dong Daddy and hamfisted attempts to address the issues of the day. Nevertheless, it was lighthearted and fun. Eventually, though, it was cancelled in 1973, brought back in 1976, and re-cancelled in 1978. Altogether 53 issues were published.

In the Bronze Age, the series returned as The New Teen Titans, launched in 1980. Written by Marv Wolfman and drawn by George Perez, this version of the series was the most successful and the most iconic (as well as being the version the animated series is most based on). It brought back Robin, Wonder Girl, and Kid Flash, and teamed them up with new characters Cyborg, Raven, and Starfire, along with previously-established character Beast Boy, now renamed Changeling.

The series moved into Darker and Edgier territory, and was a trendsetter in that respect; for instance, an early storyline involved them going up against "Deathstroke the Terminator", a paid assassin, and being infiltrated by the not-so-innocent Terra. It was heavily character-based, with lots of conflict, romance, and soul-searching (that occasionally slipped into Wangst).

This version was not only popular, but often considered DC's number one title at the time, a rival to the X-Men (which they eventually crossed over with), and a major definer of the tropes that came to be recognized as comics' Bronze Age. However, writer fatigue and removal of the book from newsstands to prop up DC Comics' direct market line of books led to it collapsing into boredom and fan apathy. The arrival of a new editor inspired Wolfman to shake up the book, using a subplot involving the mysterious "Wildebeest Society" that went on way too long and didn't have a very good ending. Fan favorite villain Deathstroke became a good guy, half the roster was slaughtered/turned evil/depowered, popular villain Terra was brought back (as a genetically altered underground dweller who was oblivious to her counterpart's evil history); none of which really helped the book and ultimately led to the Batman editors having their big chance to take back Nightwing from the Titans (Wolfman had the sole rights to him since 1980), to the horror of fans of the book.

Ultimately the book was cancelled, but within a year was relaunched, consisting of an aged-down Atom and a bunch of new characters, but it wasn't very successful (to the point where poor Risk became C-List Fodder to the extreme with the morbid running gag of losing limbs to Superboy-Prime). And let's not even talk about Team Titans, a group of future-sent teens.

At this point, the idea of the Teen Titans split two ways. A late 90s series just called Titans lasted quite a while (and featured most of the original team and the 1980s successful team, plus a few new characters), but was never a big seller, and eventually delved into some truly horrific storytelling by Jay Faerber (the "Jesse Quick sleeps with her mother's fiancee" storyline). The other idea took the original idea of a band of teenage heroes and sidekicks, and became Young Justice. The former tended even more toward the soul-searching of New Teen Titans, while the latter went through mostly lighthearted adventures and character-based comedy.

About this time, the Teen Titans animated series premiered. After it became popular, the Powers That Be decided they wanted a Teen Titans comic that resembled the show. Thus, both Titans and Young Justice were cancelled, and the more marketable characters from the latter were brought together with the more nostalgic characters from the former in the miniseries Graduation Day, which led into a relaunch of Teen Titans written by fan favorite Geoff Johns.

This series was reasonably popular, but involved several changes in characterization which annoyed long-time fans. For instance, the Fun Personified character, Impulse, was shot in the kneecap (with ADD curing bullets, as many disgruntled fans have quipped) and suddenly became Kid Flash, a more intelligent and serious character than before (although he did retain some of the humor that made him popular in the first place), and the modern version of Superboy was retconned into having Lex Luthor's DNA and worrying about turning evil because of it. Meanwhile, the Tomboy Cassie Sandsmark was stripped of her original personality and made The Chick, only to soon be turned into a raging bitch while the book itself bent over backwards trying to present her as a "perfect" leader and as pure as the original Wonder Girl. Generally, the ex-Young Justice characters were on the receiving end of this, being made Darker and Edgier as an attempt to invoke the New Teen Titans days.

Recently, the series has been revamped again, introducing new Legacy Characters (such as Sailor Moon-esque Miss Martian), and attempting to be both Lighter and Softer (for example, bringing Wendy and Marvin from Superfriends into the DCU) and Darker and Edgier, killing off even more characters (such as the aforementioned Wendy and Marvin, at the hands of a murderous devil dog version of Wonder Dog, no less). Such gore-filled editorial mandates led to writer Sean McKeever to quit the book in protest, and things have spiraled still further down the drain, to such an extent that DC has reunited the 80s New Teen Titans into their own book "Titans" (again) to offshoot the sucking of the main book. Alas, "Titans" somehow managed to suck even more, and, after two years of dismal and declining sales, the various team members have been 'graduated' to the Justice Leage, 'demoted' to the Teen Titans or, in at least one case, been the unfortunate and unwilling recipient of a Dethroning Moment of Suck. "Titans" was now about a Deathstroke-lead team of villains, while the simultaneous run on "Teen Titans", by comic newcomer Felicia Henderson, had few champions, even amongst the most rabid fans.

Around the start of 2011, J.T. Krul took over writing the main book, with fan-favorite Nicola Scott on art, and so far, their run has been fairly well-received. Both Titan books were cancelled in August; these were replaced in September with a single book, written by Scott Lobdell and drawn by Brett Booth, as part of DC's New 52 relaunch. The starting line-up consists of Red Robin, Kid Flash, Wonder Girl, and Solstice, along with with two new characters, Skitter and Bunker. Superboy starts out as an enemy under control of N.O.W.H.E.R.E., an organization devoted to capturing, controlling, or killing young metahumans. He eventually joins the Titans after they save him from dying at the hands of his creators. This leads into The Culling, a crossover with Legion Lost, during which both groups face off against N.O.W.H.E.R.E.

Notably, nearly every single run since the 1990s has been an attempt to copy the success of the 1980s version, and every single one has eventually fizzled out thanks to a combination of bad writing and Executive Meddling.

This page has a character sheet.

Tropes used in Teen Titans (Comic Book) include:
Retrieved from "https://allthetropes.org/w/index.php?title=Teen_Titans_(Comic_Book)&oldid=1888238"
Categories:
Cookies help us deliver our services. By using our services, you agree to our use of cookies.