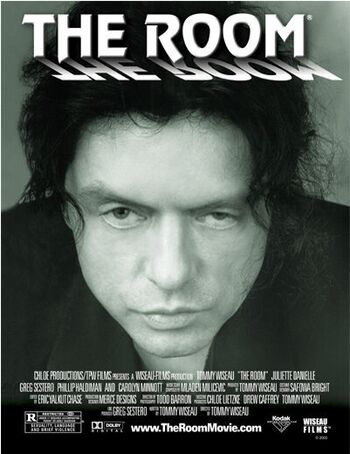 The Room is a very strange 2003 film by an unlikely filmmaker named Tommy Wiseau. It is ostensibly about a man, Johnny, played by Wiseau, tortured by the betrayal of his fiancée Lisa and his best friend, Mark, who are having an affair together.

It was made on a budget of $6 million, even though you'd never know it. The only real locales are the eponymous room, a different room, and a rooftop, punctuated with Stock Footage establishing shots of San Francisco just to spice things up.

A lion's share of the money went into the production itself, as Wiseau decided to shoot the film in both 35 mm film and HD video side-by-side. The film was theatrically released only in Los Angeles. It was advertised by a vague billboard consisting entirely of Wiseau's face staring down at visitors in the area.

The Room continues to be screened in L.A. and other cities, becoming a cult phenomenon of sorts. Showings include interactive affairs à la The Rocky Horror Picture Show, which are often accompanied with guests throwing plastic spoons at the film (which has a recurring spoon motif), blurting the film's dialogue back at the characters, tossing footballs (themes of touch football are explored in the film) and dressing up as their favorite character.

It was exposed to a national audience for the first time on Adult Swim on April Fools' Day, 2009. Tommy Wiseau was also the focus of a Tim and Eric Awesome Show, Great Job! episode which aired immediately after the 2009 showing, causing Adult Swim fans to refer to it as The Tim and Eric Movie. A Riff Trax commentary for the film was released in 2009.

There is also a flash game tribute to the film at newgrounds.com.

Not to be confused with Silent Hill 4: The Room, Room by Emma Donoghue, The Room by Harold Pinter (which isn't quite as awkward), or The Room, a Hubert Selby Jr. novel.

Tropes used in The Room include:
Retrieved from "https://allthetropes.org/w/index.php?title=The_Room&oldid=1709205"
Categories: