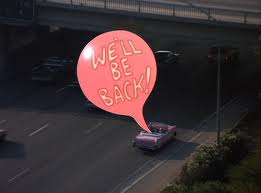 A Sequel Hook is something in a work that suggests that there is a clear possibility for another story. The MacGuffins may come in threes, the Big Bad might be Not Quite Dead, or, more blatantly, as the story ends another adventure might be shown beginning.

The original work still has closure but, by leaving minor plot elements unresolved, the writer has made writing a sequel easier. If the audience demand is there, they'll be ready. In fact, this method is so common the audience will identify any unresolved plot element or any ending short of Happily Ever After or Kill'Em All as a hook. Sometimes the hook was just that, the writers are not sure which direction they would be going in the later movie.

Pretty much every film based on a comic book sets itself up for a sequel, and any movie that goes out of its way to establish a very expansive universe that has room for a sequel. In the case of adaptations their source is usually a medium known for making multiple storylines and, in most cases, have a decades-long Myth Arc to mine for ideas.

If the Sequel Hook revolves about a character other than the main character, it may indicate a possibility of Changing of the Guard.

Make note that a Sequel Hook is not a combination of a Mythology Gag you noticed and wishful thinking. This is where the movie takes a brief side glance to let you know that more is coming. This is recognizable to almost anyone watching/reading, not just the fans that notice a minor gag in an adaptation.

If the story is complex enough, there can be a fine line between this and an outright Cliff Hanger. And the two can overlap if the story concludes, everyone's happy and then a new problem shows up to put everyone in turmoil.

If a movie poses a Sequel Hook only for no sequel to ultimately be forthcoming, this can be the source of unintentional humour later on down the track.

Compare The End - or Is It?, Here We Go Again, The Stinger, And the Adventure Continues..., To Be Continued, Saved for the Sequel. Can occur as part of Inescapable Horror.

Examples of Sequel Hook include:

Retrieved from "https://allthetropes.org/w/index.php?title=Sequel_Hook&oldid=1947242"
Categories:
Cookies help us deliver our services. By using our services, you agree to our use of cookies.