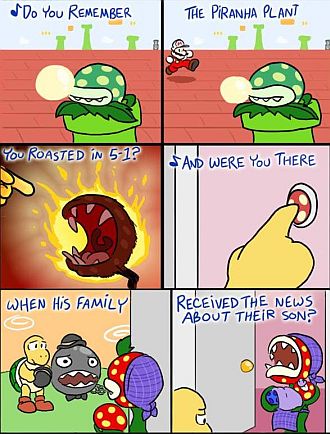 Well, do you remember them, You Bastard? Do you?

When the hero confronts the Big Bad, no matter his crimes, he will spare him, despite all logic being against it; however, when he kills a Mook who happens to be in his way, it's delicious.

Why? Because Red Shirts and Mooks are not generally seen as people. After all, they lack a name and other distinguishing characteristics, so they also have no identity or soul.

This is generally done intentionally. A primary antagonist, even if their face is somehow concealed, will likely have a very distinctive appearance and a considerable amount of dialogue, establishing him as too important to kill. However, mooks are often clones or wear masks (perhaps even both), and consequently have very little chance of surviving an encounter with the hero.

However, there are exceptions that can save a mook. If the mooks switch sides (a rare event), they usually get the benefit of Redemption Earns Life; additionally, if they were Good All Along and only doing evil because they had no choice, they have a shot. Also, some works of (generally kid-friendly) fiction explain the heroes used a Non-Lethal KO on their foes.

Compare What Measure Is a Non Super, What Measure Is a Non Unique, and What Measure Is a Non-Human?. A Million Is a Statistic can be this when applied to mooks in large numbers. Contrast Immortal Life Is Cheap. Pay Evil Unto Evil normally goes hand-in-hand with all this mookocide, often with sneers about the way mooks will go around Just Following Orders. Sometimes justified(?) by the assumption that mooks are Exclusively Evil, though, as many examples show, entirely innocent Gullible Lemmings are often gunned down, as well. Breakout Mook Character may be a subversion. Notably lampshaded by the Mook Horror Show.

Before adding an example, consider this: is the Final Boss treated any better than the mooks? If not, it's probably not an example.

Examples of What Measure Is a Mook? include:

Retrieved from "https://allthetropes.org/w/index.php?title=What_Measure_Is_a_Mook%3F&oldid=1967698"
Categories:
Cookies help us deliver our services. By using our services, you agree to our use of cookies.