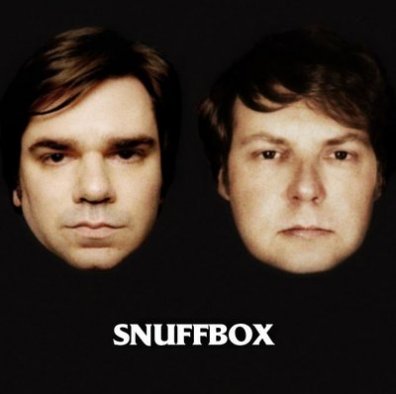 Highly surreal and bawdy Sketch Comedy / Britcom, starring Englishman Matt Berry (aka George the Volcano) and American Rich Fulcher. Each episode has one plot focusing on them as a pair of well-to-do hangmen at a gentleman's club, as well as various sketches of tangential relevance and canonicity. To add to the confusion, almost every character has the same name as their actor, so it's difficult to tell which Matt it is you're watching, but the show is funny enough that you don't care.

The show was highly reliant on Running Gags that, though hilarious, probably would have gotten old eventually were it not for British Brevity: the series only ran six episodes.

Also see Garth Marenghi's Darkplace, most of whose cast have appeared on this show at one time or another. Also also see The Mighty Boosh, the show on which Messrs. Fulcher and Berry met.

Tropes used in Snuff Box include:
Retrieved from "https://allthetropes.org/w/index.php?title=Snuff_Box&oldid=1436327"
Categories: