Everything About Fiction You Never Wanted to Know.
Jump to navigation Jump to search
/wiki/Samuel L. Jacksoncreator 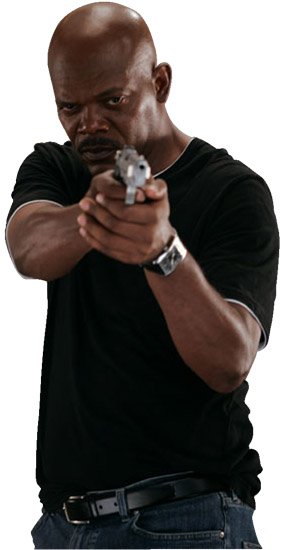 Samuel Leroy Jackson (born 1948) is one of the top leading men and supporting actors in Hollywood today. Judging by box office performance alone, he's the second-highest grossing movie star ever, behind prolific Voice Actor Frank Welker. If you see a Badass Scary Black Man with No Indoor Voice in one of your favorite films, chances are good that this guy's playing him (and will likely give you a few lines to remember for ages), 'specially if he's bald. Also, interestingly enough, Sam Jackson, despite being the badass that he is, generally dies like a punk.

Please do not confuse him with Laurence Fishburne. According to both actors' IMDB entries, this happens frequently, in both directions.

And, for God's sake, don't try to portmanteau his first name and middle initial together, creating "Samuelle Jackson." It never ends well. In more formal situations one should use his full title, "Samuel L. Mother Fuckin' Jackson." ("Sammie J" is also acceptable, albeit in very small doses.) Alternatively, "Mr. Jackson" is entirely appropriate, and less likely to get a Badass annoyed with you.

For those who still believe that being a nerd and being a badass motherfucker are two unrelated concepts, he is a big fan of anime, videogames, manga and comic books.

As one might guess from looking a little below this entry, he is a living Fountain of Memes.

Unsurprisingly, he is an element on the Periodic Table of Awesoments -- abbreviation Mf (element 37).

On a lighter note, Jackson is one of those lucky Hollywood few who is Happily Married: he has been married to LaTanya Richardson, whom he met at Morehouse College, since 1980.

He also did an anti-gun violence PSA, which can be found here.

Samuel L. Jackson has performed in the following roles:
Retrieved from "https://allthetropes.org/w/index.php?title=Samuel_L._Jackson&oldid=1861387"
Categories:
Cookies help us deliver our services. By using our services, you agree to our use of cookies.