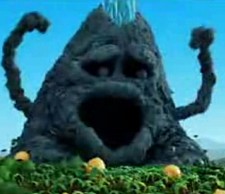 As frequently as some commercials appear on TV, it's hard not to get these phrases stuck in your head. Simples! *squeaking noise*