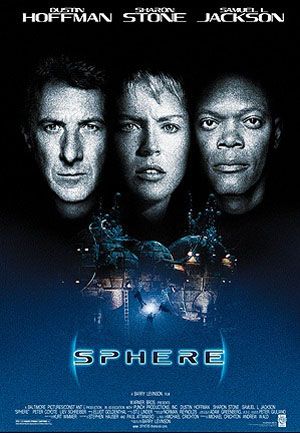 Sphere is the name shared by a 1987 novel by Michael Crichton and its 1998 film adaptation. Both works combine elements of two genres: Science Fiction and Psychological Thriller. The film was directed by Barry Levinson, previously known for such films as Disclosure and Wag the Dog. The main stars were Dustin Hoffman, Sharon Stone, and Samuel L. Jackson.

The film begins with the discovery of a spacecraft deep within the southern Pacific Ocean. The thickness of coral growth on the spaceship suggests that it has been there for almost three hundred years. The United States Navy believes the spacecraft is alien in nature, sets up an underwater research facility at the site, and assigns a group of scientists and naval personnel to investigate further. They are:

The first thing the team establishes is that this ship is not alien but man-made. More specifically, American. But from a different century. The ship seems to have somehow time-traveled from the future, the last entry in the log being dated 06/21/43. It had apparently been on a mission to gather objects from around the galaxy to bring back to Earth for study. One of these objects is a large, perfect sphere in the cargo hold that eerily hovers above the ground and has no obvious function.

Soon the crew are contacted by a mysterious entity calling itself "Jerry," which they assume to be an alien and related somehow to the mysterious sphere. Before much more can be learned, a powerful typhoon suddenly arrives, trapping all below until it blows over. Within the following days, things go horribly wrong. Strange sea creatures menace the station, crew members die in a series of tragic incidents and communications from "Jerry" have inexplicably become irrational and hostile. As the situation grows worse, the surviving team members make a shocking revelation as to the true nature of both "Jerry" and the sphere, but has it come too late to help them escape a living nightmare?

The film was a box office flop. It earned 37 million in the U.S and underperformed elsewhere, failing to even cover its budget. It ranked 58th for the year. Fans of Crichton noted many differences with the source novel, including the character's histories and personalities, while critics dismissed the rushed-production appearance and derivative plot; similarities were noted with Forbidden Planet, certain episodes of Star Trek, 2001: A Space Odyssey and Alien.

Tropes used in Sphere include:

When they are finally rescued, they decide that the power to do anything with just your thoughts is too dangerous, so they decide to forget everything that's happened, explain the deaths of everyone by a leak or something and just by thinking this, it becomes reality. So basically, everything that happened in the entire book has become irrelevant in the last paragraph or so. Or was it? There is the implication that Beth didn't actually give up the power after all.

Norman: What worries me is that it's reflecting everything but us. I hate to be the one non-scientist who picks this up, guys.

Beth: What's the matter, Norman?
Norman: It's a little hard to let go of. Something that could've been... this gift? The power to make your dreams come true. We're given the greatest gift in the history of mankind. We're given this magic ball. And it says "Imagine what you will and you can have it." That's an extraordinary gift, but we're so primitive we... we manifested the worst in us, because what we have inside us... is what we have inside of us, instead of the best of us. What does that say?
Harry: We weren't ready, Norman.
Norman: We have what's called an imagination. I mean, look what we're capable of. We can... (sighs) We're not ready.