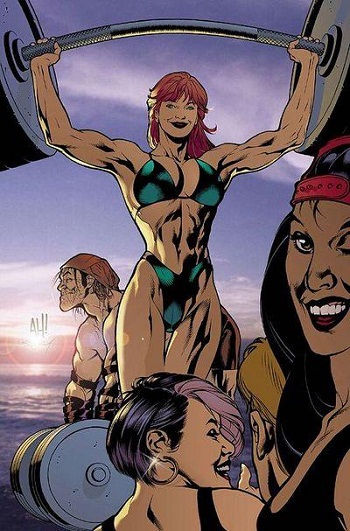 A lot of the time, they say No Guy Wants an Amazon. No guy wants a woman physically stronger than he is. Unless she is one of these women.

Basically, the Amazonian Beauty is what happens when Ms. Fanservice hulks out.

Often times, such as in fighting video games like Street Fighter, a lot of beautiful women are jacked but no one comments on it, since to the characters it is the norm for them to see characters like that, despite the fact that they are still Ms. Fanservices who go above and beyond the call of duty in some cases.

A quick litmus test for this trope is:

If the answer to all four above is "yes", the character qualifies for this trope.

This character can take her muscularity to Heroic Build levels. Sometimes starts out as a Super Strong Child, and usually (if not almost always) is an Action Girl. Almost always has large breasts. And as mentioned above, is pretty much always a Hot Amazon. Her smaller (and equally dangerous) cousin is the Cute Bruiser. Given that these girls are often tall to further enhance their presentation of strength, romances with them are likely to result in Tiny Guy, Huge Girl and Masculine Girl, Feminine Boy.

Compare Hot Amazon and contrast Brawn Hilda, Big Beautiful Woman. Some of these characters also double as Statuesque Stunners. When the female in question worries about the slippery slope between this trope and Brawn Hilda, it usually results in Muscle Angst.

Examples of Amazonian Beauty include:

Retrieved from "https://allthetropes.org/w/index.php?title=Amazonian_Beauty&oldid=1970311"
Categories:
Cookies help us deliver our services. By using our services, you agree to our use of cookies.