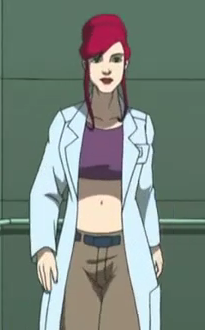 Or, if you're feeling punny, a Test Tube Babe.

More a staple of movies (especially science fiction), but also appears regularly on TV. When a male protagonist needs to consult with or bring in an expert on some obscure and/or technical subject (poisonous orchids, particle theory, rare diseases, ancient languages, prehistoric sharks, whatever), said expert will turn out to be female, drop dead gorgeous, and, at twentysomething, conspicuously too young to have possibly earned the relevant academic degrees or otherwise accrued such expertise (often this is handwaved by mentioning at some point that she was a Teen Genius). Not all of these are required, but the general gist is good enough.

The reason why this trope is popular is because men want a woman who can tell them about Lagrange points and do a lap-dance. Preferably both at the same time.

If the word "model" appears anywhere on The Other Wiki's entry on their actor, you're definitely dealing with one.

A Hot Scientist is frequently a Hot Librarian as well, and often ends up as a Girl of the Week or Temporary Love Interest. Could be considered an evolution of the Mad Scientist's Beautiful Daughter, combining the scientist and his daughter into one character (although they tend to be sane). She may also be an Action Girl in a Badass Labcoat.

This, of course, completely ignores the fact that most labs in Real Life have very strict dress codes for the sake of personal safety. For example, most require those with long hair to have it all completely tied back while doing lab work. Also, most of them strictly prohibit shoes that don't adequately cover the feet, such as sandals, flip flops, and heels. Appropriate clothing is also compulsory - shorts and bared midriffs are obviously never allowed. But, of course, safety and practicality are completely trumped by the Rule of Sexy. Male examples tend to follow the dress code more often than not. To Hollywood's credit, at least scientists on TV usually remember to wear their safety goggles...

Examples of Hot Scientist include:

Retrieved from "https://allthetropes.org/w/index.php?title=Hot_Scientist&oldid=1961191"
Categories:
Cookies help us deliver our services. By using our services, you agree to our use of cookies.