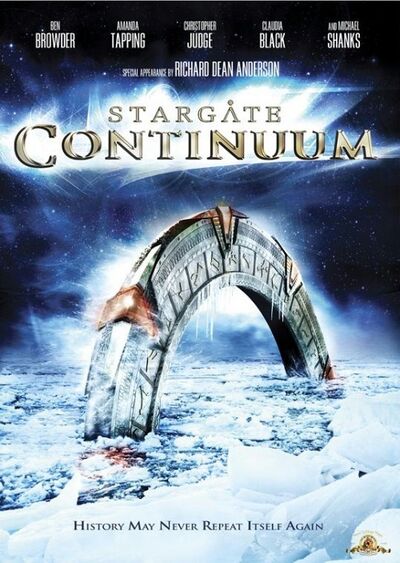 The second direct-to-DVD film based on Stargate SG-1 and the third movie in the Stargate Verse overall.

Unlike The Ark of Truth, which acted as the "true" series finale, Continuum is a standalone story. As SG-1 and General O'Neill attend the execution of the System Lord Ba'al (or so they think), the real Ba'al goes back in time to destroy Earth's Stargate as it is transported by sea to the United States -- coincidentally by Cameron Mitchell's Identical Grandfather. While the Stargate is saved, everyone aboard the ship is killed, resulting in it being stranded in the Arctic and the Stargate lost. As the Tok'Ra city vanishes around them, SG-1 rush for the Stargate to find a different Earth -- one where the Stargate program was never launched, now defenseless against Ba'al, who used his knowledge from time travel to defeat the other System Lords.

Tropes used in Stargate: Continuum include:
Retrieved from "https://allthetropes.org/w/index.php?title=Stargate:_Continuum&oldid=1777591"
Categories: