The Secret Return of Alex Mack 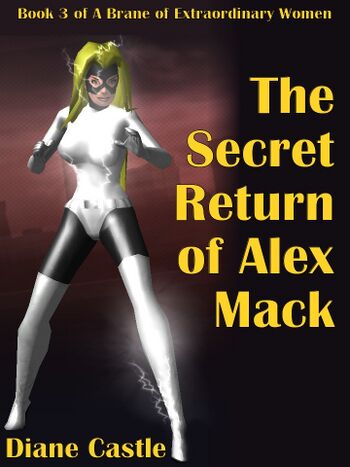 The Secret Return of Alex Mack is a Mega Crossover Fanfic by Diane Castle focusing on the title character of the 1990s Nickelodeon series The Secret World of Alex Mack. It is a sequel to her earlier fic, The League of Extraordinary Women, and is launched by Alex Mack's efforts, once she returns to her own world, to find the local counterparts to her teammates from the previous story, and to establish a genuine superhero identity for herself in order to protect her friends and family while she continues to help people with her powers. Along the way she becomes affiliated with a small, unconventional government organization created to deal with supers, which results in her going from a small-town local hero to a global one, and lets her begin assembling a team of extraordinary individuals -- many super-powered, some not -- around herself.

And it also leads to the discovery of a global conspiracy to kill off 99% of the world's population...

The Secret Return of Alex Mack can be found here. It is the first story in and the original inspiration for The Teraverse, a Shared World writing project, as well as one segment of Castle's larger series, A Brane of Extraordinary Women.

Although an effort has been made to conceal anything that might be too big a spoiler for the overall story, there are still likely to be spoilerish details unhidden in the text below -- consider this fair warning that you might run into them.

Artwork for The Secret Return can be found on the home page of A Brane of Extraordinary Women.

As a Mega Crossover fanfic, The Secret Return of Alex Mack incorporates elements from the following works:

In-Universe works which affect the plot in one way or another:

Tropes used in The Secret Return of Alex Mack include:

When Shar makes her Heroic Sacrifice to stop a Grey Goo disaster, it utterly devastates Alex for this reason.

Retrieved from "https://allthetropes.org/w/index.php?title=The_Secret_Return_of_Alex_Mack&oldid=1877875"
Categories:
Cookies help us deliver our services. By using our services, you agree to our use of cookies.