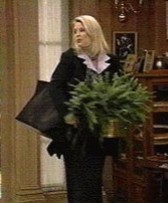 Bet you can't guess what's behind the plant.

Nowadays, when an actress gets pregnant, this event is usually written into the show as the character getting pregnant. However, sometimes the writers decide not to include the pregnancy, perhaps because it can't be written in convincingly, it doesn't fit with the storyline, or perhaps it's just that Status Quo Is God. In this case, they commonly resort to various (ineffective) tricks to avoid the actress' bump being noticed, such as

Alternatively, the character might just be written to put on a lot of weight, due to a sudden "eating binge" or whatever (see "Frasier" below). Note that this trope does not include cases where the actress' pregnancy is written into the show - that's Reality Subtext.

Examples of Hide Your Pregnancy include: