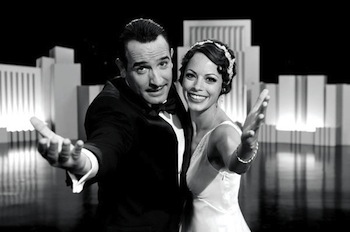 The Artist is a 2011 French film emulating the style of cinema in the 1920's, and the Academy Award winner for Best Picture of the year. Directed by Michel Hazanavicius, it stars Jean Dujardin as George Valentin, a silent movie star in 1920s Hollywood whose career goes into decline with the Great Depression and the advent of talking pictures. He falls in love with a young ingenue named Peppy Miller, played by Berenice Bejo, whose Hollywood career arc is the exact opposite of Dujardin's.

The Artist is unique not just for being shot in black-and-white, and in the old 4:3 Aspect Ratio, but being an almost completely silent film, possibly the first feature-length silent film to receive wide distribution since Mel Brooks put out Silent Movie in 1976. It should also be noted that this is one of the first movies in years to be filmed entirely in Hollywood.

Tropes used in The Artist include:
Retrieved from "https://allthetropes.org/w/index.php?title=The_Artist&oldid=1912317"
Categories:
Cookies help us deliver our services. By using our services, you agree to our use of cookies.