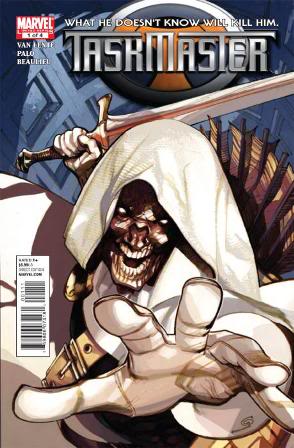 "Personally, I think we've done enough of the beating and torture and I'm ready to move straight to the beheading."

Taskmaster is a Marvel Comics character. He first appeared in "Avengers" vol. 1 #195 (May, 1980), created by David Michelinie and George Pérez. He serves as a sometimes hero, sometimes villain of the Marvel Universe. His trademark is the ability to copy the movements, and, therefore, skills of those he watches, which he calls "photographic reflexes". What's interesting about him as compared to other power mimics is that he doesn't copy the powers of those individuals he sees, only their mundane skills. One example of this is when he's working for the 50 State Initative and copies the movement skills of Spider-Man for use in training the Scarlet Spiders.

Taskmaster provides examples of the following tropes:
]
Retrieved from "https://allthetropes.org/w/index.php?title=Taskmaster&oldid=1846527"
Categories:
Cookies help us deliver our services. By using our services, you agree to our use of cookies.