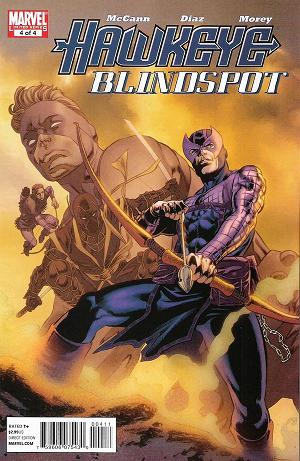 The many faces of Hawkeye.

If you're looking for the Young Avengers version of Hawkeye, go here.

To successfully make a shot, you gotta follow and master basic steps. Your stance is the foundation. Where you draw your strength. Nock the arrow and grip. Realize you are wielding a weapon. Mindset. Focus solely on your goal, regardless of your surroundings. Be in the now. Set up and draw. Inhale and prepare for what you are about to do. Anchor and hold. There is no going back. Aim. All that remains is you and your target. Release and follow through. Master those and you hit every time. One last step. Feedback. Basically...take responsibility for the outcome. For every shot.
—Hawkeye

Hawkeye is a Marvel Comics character created by Stan Lee and Don Heck. Making his debut as a reluctant villain in Tales of Suspense #57 (September, 1964), Hawkeye quickly turned his back on that life and joined The Avengers after a chance meeting with Edwin Jarvis.

Raised by an abusive alcoholic father and a mother who didn't care, Clinton "Clint" Barton and his older brother Barney had a difficult life. After his parents died in a drunk driving accident, Clint and Barney were sent to an orphanage for 6 years. Hungry for a better life, Clint and Barney ran away until desperation forced the brothers to join up with the Carson Carnival of Traveling Wonders. Years passed, during which Clint caught the attention of the Swordsman and Trick Shot, two talented circus performers. Under their tutelage, Clint gained the sharpshooting skills that would allow him to become a hero.

As Swordman's assistant, Clint was happy until the day he found out that his mentor was embezzling from the carnival. About to turn in the Swordsman, Clint was brutally beaten by his mentor until Barney and Trick Shot intervened. Trick Shot became Clint's new mentor while Barney grew tired of carnival life. Having condemned Clint for his perceived disloyalty to the Swordsman, Barney prepared to enlist in the Army. Asking Clint to join him, believing the two needed a fresh start, Barney was disappointed when his younger brother declined.

Jealous of the fame the then-new hero Iron Man was getting, Clint decided to use his skills to become a superhero as well, The Hawkeye. Unfortunately, his weakness for pretty women got him involved with Black Widow, who at the time was a spy working for the Russians against Iron Man, and she tricked him into attacking the hero. He soon realized he'd been duped however. Given a chance to redeem himself, Hawkeye joined the Avengers and has been affiliated with the team ever since, even leading its spin-off, the West Coast Avengers. Ironically, the Widow would later end up doing a Heel Face Turn herself and becoming a superhero, and even joined the Avengers, having made up her peace with Clint.

Years later, Clint fell in love and married Mockingbird - a possible Captain Ersatz for Green Arrow's lover, Black Canary- and they married, though they had troubles after she killed a man who had raped her. She appeared to have been killed by the Demon Lord Mephisto for a long time, until it was revealed that it was actually a Skrull spy in her place during the Secret Invasion. The real Mockingbird and Hawkeye have since reunited.

Clint was one of the casualties during the rampage of Scarlet Witch in Avengers Dissasembled. Due to the events of House of M, he came Back From the Dead, took up the mantle of Ronin with permission of the original Ronin (Maya Lopez), as the name Hawkeye at the time was used by a member of Young Avengers, and eventually joined the New Avengers, leading to the events of Secret Invasion (and also reunited with the real Mockingbird in the aftermath). During the Dark Reign, he was appointed as the leader of the New Avengers and was doing a fair job (aside of one Leeroy Jenkins moment), until the return of Captain America (comics). After Dark Reign, Clint became a mainstream Avengers member, once again donning the Hawkeye alter ego. However, shortly after this he divorced with Mockingbird.