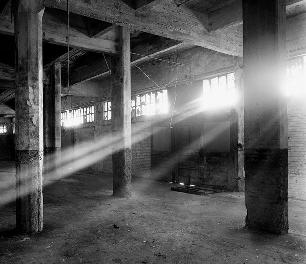 Some settings speak louder than others. An Abandoned Warehouse screams "let's rumble" at about the same volume that a grand but derelict house on a hill shouts "supernatural and creepy". If any given cordial enemy says "let's meet in an abandoned warehouse", you can pretty much drop the "cordial" part right then and there, and if nobody fires a gun during the warehouse scene, it's only because it's a children's show. And even then, it'll still involve whatever nerfed magical battle powers the show entails.

For extra trope points, the warehouse should feature a large and complex series of catwalks running among the rafters. This allows the villain to position additional Mooks there for the hero to shoot down, and means that he may retreat onto them for the traditional Climbing Climax. There will also be lots and lots of chains hanging from the ceiling for unexplained purposes, as well as lots of water dripping from the roof to give off some nice and eerie clanking and dripping noises for the cat and mouse chase.

Common iterations: pre-appointed confrontations, busting up a bunch of Mooks in a video game, and ambushes for the Too Dumb to Live sorts in the cast. In Superhero settings, there will generally be large amounts of property damage, since "abandoned warehouse" is shorthand for "building we can completely destroy without feeling guilty."

Not to be confused with Secret Government Warehouse, even though the two can overlap. Nor the Abandoned Warehouse District, which exists to be totaled during an even bigger fight.

In Real Life, abandoning warehouses is rather common which makes this trope Truth in Television. Also see Never Recycle a Building.

Examples of Abandoned Warehouse include:

Retrieved from "https://allthetropes.org/w/index.php?title=Abandoned_Warehouse&oldid=1922324"
Categories:
Cookies help us deliver our services. By using our services, you agree to our use of cookies.