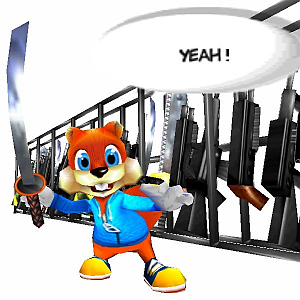 Japan is the country of origin of a large number of games, movies, TV shows, myths, and legends. Rule of Cool says swords are cooler than guns and tends to also hold the katana to be the coolest sword.

Of course, in real life, a katana isn't inherently better than any other type of bladed weapon. Different areas of the world developed and used different weapons to fit their unique situations, and for the most part, they were all pretty balanced compared to each other. A katana in fiction (and on film, Every Japanese Sword Is a Katana) can slice through anything as if it were butter. Further, merely wielding a katana makes one a superhuman fighter. A skilled fictional katana wielder can slice bullets in mid air, chop gun barrels off and even slice other swords not as cool as the katana off at the hilt. The katana wielder him/herself will also be considerably more agile and skilled than any other weapon wielder. If on the enemy side, expect a katana wielder to at least be an Elite Mook, if not a Big Bad or The Dragon.

Since fencing with katanas will usually be depicted as being an "honorable" manner of fighting, it will in most cases be implied if not stated outright that using firearms is despicable, cowardly or somehow "low". At the same time, fencing won't be depicted as "low" compared to hand-to-hand combat, nor will it be "low" for a katana wielder to attack people armed with less effective melee weapons, like knives or farming implements.

Wooden Katanas Are Even Better is a Sub-Trope. We also have a Useful Notes page on Swords; add further details of Real Life swords and katanas there. Those wielding a katana may Swipe Their Blades Off.

Examples of Katanas Are Just Better include:

Retrieved from "https://allthetropes.org/w/index.php?title=Katanas_Are_Just_Better&oldid=1919477"
Categories:
Cookies help us deliver our services. By using our services, you agree to our use of cookies.