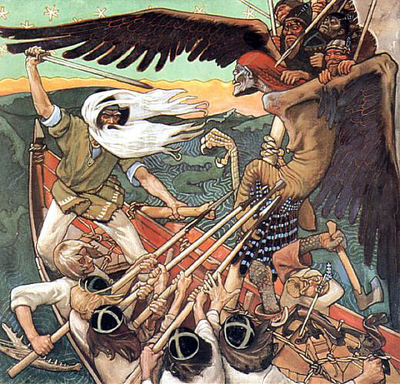 The Kalevala (or "Land of Heroes") is an epic poem and book based on folk poetry collected by Elias Lönnrot. It is considered the national epic of Finland. Undeniably the most influential work of literature there, it's credited with initiating a national awakening that eventually led to Finland's independence and preserving the Finnish language. The Tales of Ensign Stal is probably the only piece of Finnish litterature that even comes close to the status of The Kalevala. It also inspired others, such as JRR Tolkien, Michael Moorcock and Don Rosa, so it's no coincidence that the stories of Kullervo and Turin Turambar have many similarities.

The Kalevala is, first and foremost, the story of heroes and adventurers in mythic Finland, and the greatest of them all is Väinämöinen, the shaman hero born 700 years old to the Maiden of Air and gifted with a magic singing voice. There are great journeys, heroic deeds, tragic mix-ups, evil witches, magic poetry and something called a Sampo. But some of the best aspects are the delight in nature metaphors and the allusions to everyday Finnish life. The flair for natural beauty can delight even someone who doesn't take to the plot.

The Kalevala, as composed by Elias Lönnrot, is a product of the 19th century (published 1849). Lönnrot's source materials go back much farther; how much farther is not exactly known—the first description of Finnish mythology is that by bishop Mikael Agricola in 1551. It is thought that much of the folk traditions that Lönnrot cast into the Kalevala are Older Than Print, though Lönnrot modified them to weld them into a single coherent narrative.

Among more direct adaptations of the Kalevala are several of the musical compositions of Finland's greatest composer, Jean Sibelius, of which the best known is probably Tuonelan joutsen -- "The Swan of Tuonela" (or, if you prefer, "The Swan of the Underworld"). The work also inspired many of the canvases of the painter Akseli Gallen-Kallela, including Sammon puolustus, "The Defence of the Sampo," used above as the page image. Less happily, though more hilariously, it was made into the joint Finnish/Russian film Sampo, AKA The Day the Earth Froze, featured on Mystery Science Theater 3000.

Perhaps the best-known translation of the Kalevala into English is that of William Fortsell Kirby (which gives the page quote). English-speakers have probably become familiar with the meter of the Kalevala more from its use by Longfellow in The Song of Hiawatha ("By the shores of Gitchee Gumee...") -- or perhaps the parodies of the same by Lewis Carroll and others, such as "Hiawatha's Mitten-Making" by George A. Strong:

God help you if you confuse with the flash game Legends[1] of Kalevala.

Tropes used in The Kalevala include:
Retrieved from "https://allthetropes.org/w/index.php?title=The_Kalevala&oldid=1943408"
Categories:
Cookies help us deliver our services. By using our services, you agree to our use of cookies.