The Lord of the Rings (animation) 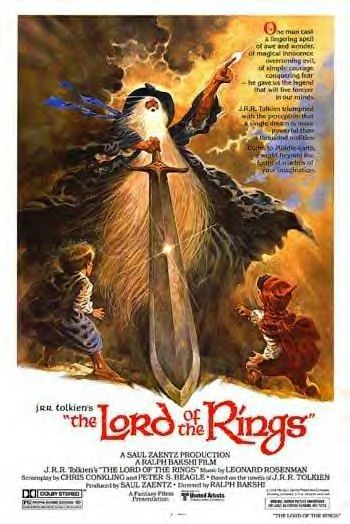 The Ralph Bakshi adaptation of The Lord of the Rings is a combination of the first book, and half of the second book. It was meant to be three films, but was forced to be shortened to two, with the intention of finishing with the sequel. Due to Executive Meddling, the original title, The Lord of the Rings Part I, was tossed out, resulting in some disappointment from viewers who expected closure to the story. And while the film did well at the box office, grossing more than enough to break even (a rarity for non-Disney feature films of the time) the rest of the second book and the third book was never completed by Bakshi. Later, Rankin Bass produced a version of The Return of The King, and Peter Jackson did his own take on the story.

The film mixes bits of Rotoscoping and live action footage. There's also a little bit of traditional animation that doesn't use rotoscoping, but it's one of those blink and you'll miss it moments in the film.

If you pay attention, Peter Jackson borrowed some things from this movie for his series - particularly the famous shot of the hobbits hiding from the Ringwraiths in the roots of a tree. Also the shot where a Hobbit has his very large feet propped up on a table; Jackson included an exact recreation of the moment.

Viewers of the movie either Love It or Hate It.

Tropes used in The Lord of the Rings (animation) include:
Retrieved from "https://allthetropes.org/w/index.php?title=The_Lord_of_the_Rings_(animation)&oldid=1833588"
Categories:
Cookies help us deliver our services. By using our services, you agree to our use of cookies.