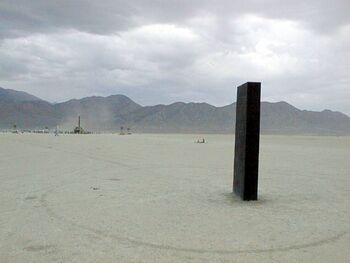 Set up a few hundred more and we'll have the hugest dominoes course in the world!

A large black slab of 1:4:9 proportions,[1] placed in reference to the Monoliths from 2001: A Space Odyssey. (The original monoliths were ancient, mysterious, and bizarrely powerful.) One of the Stock Parodies.

Not to be confused with the DC Comics character, a heroic Golem.

Examples of The Monolith include: