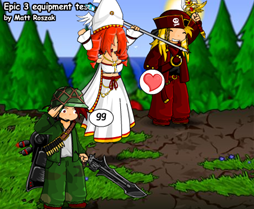 Epic Battle Fantasy is a trilogy, soon to be tetralogy, of flash games developed by Matt Roszak. You play as a Magic Knight-type character in Pirate gear who uses "Bushido" (and a rather impressive collection of specialized swords and other weapons) along with his team mate (Word of God denies any further relationship), a Fan Service-y mage named Natalie (or Natz for short). The plot for the original game is literally non-existent; you just fight wave after wave of enemies with the occasional stop at a shop to buy items. The second game continues the fight-only tradition (with an actual plot this time), but now there are save points and a minigame you can play to earn more money for the shops. After defeating the final boss, a neo-Nazi named Lance who tried to take over the world, he sides with the heroes and joins the party for the third game.

The third game in question involves the heroes (along with Lance, now a member of the team) cruelly reduced to Level 0 after releasing an Eldritch Abomination named Akron by poking it with their weapons. The game now uses a more traditional RPG approach, where the characters walk around a world map, level up, learn new skills (and re-learn old ones), etc. They travel across several locales, do optional fetch quests for NPCs, and get into the occasional minigame.

You can play the games on Newgrounds or Kongregate [1]: the first one, the second one and the third one. A fourth game is planned to be developed. The creator updates and leaks information on his deviantart page.

Has grown its own Shout-Out page.