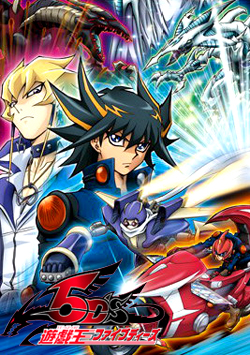 The third series under the mass-marketed, card game-oriented Yu-Gi-Oh! banner features a dystopian setting wherein the ubiquitous card game has become a way of life in the hierarchical society of Neo Domino City. With advances in technology, dueling has evolved into a popular spectator sport known as "Riding Duels/Turbo Duels". Such duels are conducted astride specially-equipped motorbikes known as "D-Wheels/Duel Runners". However, traditional-style standing duels are still conducted just as often.

The show presents a juxtaposition between the technologically-advanced Neo Domino City and "Satellite" - the common name for the now-derelict location of the original series. Satellite is where all of Neo Domino's trash goes - both literal and human. Two years before the start of the series, protagonist and Satellite resident Yusei Fudo constructed his own white Duel Runner. In a flashback, Yusei lost a duel to his friend Jack Atlas, who took Yusei's Duel Runner and ace monster (Stardust Dragon) and escaped to Neo Domino City. Jack has subsequently been established as "King of Riding Duels/Master of Faster", with the help of his own ace monster (Red Demon's Dragon) as well as the backing of the mysterious Rex Go(o)dwin. After building a new red D-Wheel/Duel Runner, Yusei makes his way to Neo Domino to duel Jack and retrieve his ace monster. Meanwhile, other events bring Yusei to the enduring attention of Neo Domino Security officer, Tetsuo Ushio/Trudge.

Mythology and the Signers: Much like the original series, 5Ds is based on an ancient mythos which inevitably lends its power to the current generation core cast. In this particular case the focus is on the Nazca lines which are seen throughout the show, on the title cards, and worked into the clothing of some of the characters. As the show progresses, Godwin reveals to Jack the existence and lore of the Signers - five chosen duelists who each bear a Mark of the Crimson Dragon. Jack was born with the Crimson Dragon's wings on his right forearm. Tenzen Yanagi reveals the same lore to Yusei who was chosen during his rematch with Jack by the People of the Stars to bear the Crimson Dragon's tail (also on his forearm) - which appears on his arm when he encounters another Signer. Aki Izayoi/Akiza Izinski and Ruka/Luna each bear a mark of the Crimson Dragon's claws. The fifth/original Signer was revealed to be Rudger Godwin, possessing the Crimson Dragon's Head. Following Rex Godwin's bid for godhood the Marks shuffle and Crow becomes the new fifth Signer. Finally, Rua/Leo has achieved his goal of being a Signer, and given a new, sixth Heart dragon mark, after Aporia killed him in their duel and his revival by Ancient Fairy Dragon

Dark Signers: The first true enemies to the Signers. Dark Signers are unfortunate duelists who, on the brink of physical death, swear revenge against another individual. Their souls then become host to an Earthbound Immortal (Jibakushin) and they become living corpses bent on destruction. The Dark Signers each wield an individual God card that, to summon, requires mass human sacrifice. True Dark Signers are distinguished by their small pupils and black sclera as well as the purple geoglyphs on their right arms in the shape of their individual God: one of the major figures of the Nazca Lines (the Spider, the Monkey, the Lizard, the "Spaceman/Astronaut" Giant, the Hummingbird, the Killer Whale, and the Condor).

Yliaster: First mentioned by Rex Godwin early in the series, they are an ancient group of people focused on correcting history for the greater good, no matter what the cost. In the first season, they aided Godwin in the search for the Signers. In the second season, its confirmed that Rudger Godwin was pushed into becoming a Dark Signer by an unnamed Yliaster member who told him to look into the light of the Momentum to see the battle between the Crimson Dragon and Earthbound Gods. In the third season, three members: Jose, Placido and Luciano appear and call themselves "The Three Emperors of Yliaster". They exhibit the ability to alter the future to small extents (allowing them to enter the World Riding Grand Prix by taking the place of another group) and claim they led by a God. Jose, Luciano and Jose were shown to be from the same man, Aporia. He, Bruno/Antinomy and Paradox were all robots created by ZONE (the true leader of Yliaster) in the future and sent into the past to correct the ruined future from happening. ZONE created the robots in likeness of his friends, who all died of old age in the apocalypse future. Finally Yliaster appears to be dissolved by the end of the series, with all of its members either dead or left the organization.

Social Commentary: 5Ds takes place in a stratified society based on a modified caste system determined by birth. This results in the worst on-screen treatment of a Yu-Gi-Oh protagonist to date. Because he is Satellite-born, Yusei is tagged, jailed and generally discriminated against. Jack is also Satellite-born but hasn't suffered the same discrimination and mistrust as Yusei because Godwin has kept his origins a secret from the public. Godwin uses this to his advantage and threatens Jack's reputation as a way of keeping him obedient. However at the end of the Dark Signer Arc, the social divide has weakened considerably thanks to the main cast's efforts to reunite Neo Domino and Satellite.

Terminology: In the tradition of Yu-Gi-Oh GX, 5Ds is an Oddly-Named Sequel 2: Electric Boogaloo. Rumors were abound concerning what "5Ds" actually stands for, such as the odd mis-named titles "Five Duel Scoop" and "Five Dimensions". Episode 96 confirms that it is a contraction of "five dragons", in reference to the five Signers and their dragons, which are needed to summon the Crimson Dragon.

Depending on who you ask, there are either three to five seasons (Episodes 1-26, which include the Prison Arc and the Fortune Cup, as the first season; episodes 27-64, or the Dark Signer Arc, as the second; episodes 65 to 103 as season three, 104 to 137 as the fourth, and 138 to 154 counting as a fifth) or two seasons (consolidating the entire 1-64 stretch as the first Story Arc and 65 and beyond as a second.) There is merit to all definitions, but the most common on this page is the three/five-season model.

The series also has an AU manga and several video games.

Colloquial address in the fan community tends to differentiate the four series of the Yu-Gi-Oh franchise along this dimension: 5Ds, GX, Zexal and DM (or Duel Monsters, in reference to the original series).

Yusei appears in the Yu-Gi-Oh Tenth Anniversary Movie that teams him up with Yugi and Judai/Jaden.

Watch it on Toonzaki here. Contains most to-date dubbed episodes and about half of the series subtitled.

In March 2011, 4Kids lost the license to the Yu-Gi-Oh franchise due to TV Tokyo and NAS not being paid royalties as well as 4Kids selling the DVD rights to FUNimation without permission from the aforementioned parties. However, the dispute was apparently somehow resolved, as 4Kids eventually licensed Zexal. What this means for the 5D's dub and if it will finish (as the dub was nearing the final arc) remains to be seen at the moment.

Has a Drinking Game.

Please remember to use the YMMV tab for subjective tropes.

Please use the original (Japanese) names when adding or editing a Trope on this page. (Aki instead of Akiza, Kiryu instead of Kalin, Rua instead of Leo, etc), we have the Dub Name Change trope to cover changes in localization.

Tropes used in Yu-Gi-Oh! 5D's include:

Jack gets tangled up - pardon the pun - in a virtual-reality simulation of them.

The Video Games provide examples of