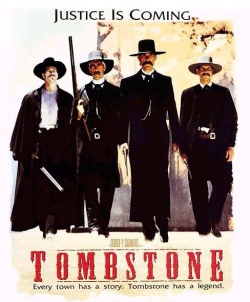 And hell's coming with him.

Tombstone is a 1993 Western starring Kurt Russell, Val Kilmer, Sam Elliott, and Bill Paxton. Set in the 1880s in Tombstone, Arizona, it centers on Wyatt Earp, his two brothers, and Doc Holliday facing off against the criminal Cowboys. The film had a large ensemble cast, with 85 speaking roles. The main Cowboys were played by Powers Boothe, Michael Biehn, Stephen Lang, and Thomas Haden Church. Charlton Heston cameos as a ranch owner.

The film is somewhat accurate, although it does portray an idealized version of the Earps while also making the whole story a lot more dramatic. In reality, the conflict between the Earps and the Cowboys is not entirely clear-cut; the Earps are generally regarded as the "good guys" only because they happened to be the ones wearing badges at the time. the exact sequence of the events at the OK Corral remains ambiguous. Critics of the Earps point out that many of them were veteran gunfighters (at least Civil War veteran Virgil was; Wyatt had been in one gunfight in Dodge City at that point, and Doc's reputation as a gunfighter is questionable to say the least), while for the Cowboys the shootout was their first (and last) and that it was therefore unlikely that they would have been the aggressors. However, as the film depicts accurately, some of the unarmed cowboys were allowed to flee unscathed, highlighting that the Earps weren't there to massacre the Cowboys. Also, Earp's defenders point to the testimonies of the unbiased witnesses H.F. Sills (whose testimony backed up Wyatt's, and who earlier heard the Cowboys threaten murder) and Addie Bourland (who testified that just before the fight, no one had their hands up). Johnny Ringo's death in particular is shrouded in mystery and originally ruled a suicide. Some other examples are the idea that both Morgan and Virgil were shot the same night, when they weren't, or the notion that the ex-Cowboys eventually joined Wyatt's posse (which was never confirmed).

The Other Wiki has articles of interest here and here if you want to see the differences between Real Life and film. IMDB has a fairly complete compilation of differences here

While the film largely focuses on Wyatt Earp, most find Doc Holliday--as portrayed by Val Kilmer--to be more memorable.

Tropes used in Tombstone include:
Retrieved from "https://allthetropes.org/w/index.php?title=Tombstone&oldid=1557343"
Categories: