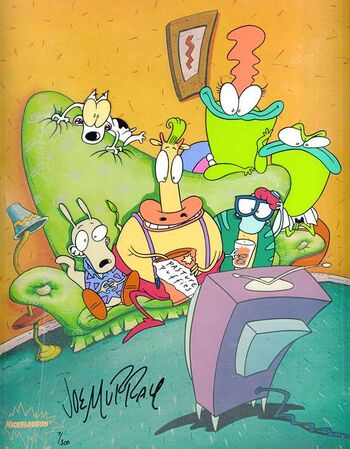 One of Nickelodeon's most famous Nicktoons. It stars Rocko, a young wallaby from Australia, adjusting to life on his own in America. Most of his days were "very dangerous days" where A Simple Plan like a trip to the laundromat or just trying to keep his job was met with bad luck and other weirdness. In later episodes Rocko's friends Heffer, a gluttonous, not-too-bright, but amiable bovine, and Filburt, a timid and geeky turtle, were often dragged along for the ride.

The writers had an amazing talent for Getting Crap Past the Radar, including a few jokes that were later censored. There were no legal DVDs available from Nickelodeon owner Viacom, leaving a vacuum that's been populated for years by pirate DVDs of low-quality TV recordings... until Shout Factory came to the rescue in 2011.

Tropes used in Rocko's Modern Life include:
Retrieved from "https://allthetropes.org/w/index.php?title=Rocko%27s_Modern_Life&oldid=1818497"
Categories:
Cookies help us deliver our services. By using our services, you agree to our use of cookies.