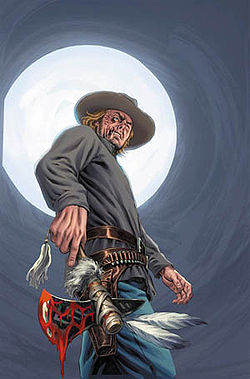 The last of the great American Comic Book Western characters.

Created in the 1970s "Weird" phase in comics, Jonah Hex was created as a deliberate subversion of every Western hero cliche you can think. He then ended up being the last headline character of the genre in the comic book medium. He first appeared in All-Star Western vol. 2 #10 (February-March, 1972), created by John Albano and Tony DeZuniga . The title was soon renamed to "All-Star Western", with Jonah remaining its star to 1977. He was then moved to his own series, which lasted from 1977 to 1985.

Jonah has a rather grim background. Raised with unrelenting abuse from his drunken father, the boy was sold to a Native American tribe, until he came of age and joined the Confederate forces in the American Civil War. Deciding to resign his commission after the Emancipation Proclamation was signed, he inadvertently left clues to his old unit which led to it being found by Union forces. Wrongly accused as a traitor, Hex left on his own, unwanted by either side even while he still wore his gray Confederate officer's uniform.

Eventually, he was adopted by another Native American chief, but was challenged to a duel of honor by his jealous son who cheated in his favor. When Jonah was forced to kill him with a knife, the chief punished him by scarring his face, giving him the hideous "Mark of the Demon."

Since then, Jonah makes his living as a bounty hunter, carrying out his hunts with ruthless efficiency, although tempered with a personal code of honor that leads him to defend and avenge the weak and the oppressed in his own brutal way. He's part of the wider DC Universe, though long-dead in the present era (his body was apparently stuffed and mounted and ended up in a traveling circus).

When his original series ended, Jonah was thrown into a post-Apocalyptic future ala Mad Max in a title called simply Hex. He had a few miniseries in Vertigo Comics with a supernatural bent, went on to a new DCU series that, with the Comics Code having lost any meaningful power, was even Darker and Edgier and Gorier than before, and eventually came full circle, returning to the pages of All-Star Western in the New 52 as the main character.

The character has appeared in Batman: The Animated Series, Justice League, and Batman the Brave And The Bold episodes and is set to appear in Legends of Tomorrow where he was played by Johnathon Schaech. Also, a feature film was released on June 18 2010 starring Josh Brolin and Megan Fox. The results were... less than auspicious, with reviews ranging from mixed to horrible, and a box office that suffered heavily (thanks mostly to competition from |Toy Story 3). There is also an animated "DC Showcase" short that serves as a bonus feature for Batman: Under the Red Hood; interestingly, it's written by Joe Lansdale, who wrote the Hex-starring Batman TAS episode "Showdown".

Tropes used in Jonah Hex include:
]
Retrieved from "https://allthetropes.org/w/index.php?title=Jonah_Hex&oldid=1846449"
Categories:
Cookies help us deliver our services. By using our services, you agree to our use of cookies.