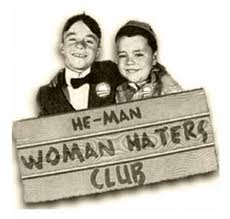 The (partial) Spear Counterpart to Does Not Like Men. When one of a character's major defining traits is his hatred of women. Usually portrayed not just as mere sexism, but unreasoning hate of women. The Depraved Homosexual rarely exhibits this trait (this is the usual department of the Camp Gay and it's played for laughs).

This trope is played for laughs more often than not—often a part of the Unsympathetic Comedy Protagonist or the Butt Monkey's personalities. In earlier works a character's outright fear of women was treated as a running gag. Dramatic protagonists who don't like women usually don't like other men that much more. Perpetrators in Crime Dramas will often have this as the root rationale for crimes against women.

Women who don't like men will more often than not be portrayed even less sympathetically, being written off as an "evil feminist", but members of this trope are usually just written as being bad from the start. Consequently, He-Man Woman Haters are very often (but not always) Straw Misogynists while their Distaff Counterparts are much less likely to be Straw Feminists.

Interestingly, the actual Spear Counterpart to Does Not Like Men, sympathetic portrayal and all, does exist—a vast number of romance novel heroes are exactly that! However, most of the works that get represented on this wiki are designed for a different audience.

The Trope Namer in this case is The Little Rascals,[1] who (with the obvious exception of Darla) held meetings of the "He-Man Woman Haters Club" in their treehouse.

If the male in question hasn't hit puberty yet, that's Girls Have Cooties. Compare Celibate Hero, Licensed Sexist, Effeminate Misogynistic Guy and Straw Misogynist. Not to be confused with a (nonexistent) He- Man and The Masters of The Universe spinoff about the titular hero being an example of this trope.

Examples of He-Man Woman Hater include:

Retrieved from "https://allthetropes.org/w/index.php?title=He-Man_Woman_Hater&oldid=1505803"
Categories:
Cookies help us deliver our services. By using our services, you agree to our use of cookies.