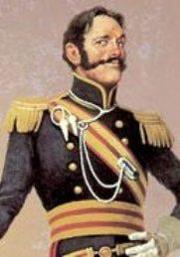 This is George Macdonald Fraser's politically incorrect series of novels, presented as the memoirs of a Victorian war hero who is actually a bully, rapist, lecher, backstabber, and coward. The character Flashman is taken from the Victorian novel, Tom Brown's Schooldays, where he is presented without any redeeming qualities. He has no redeeming qualities in Frasier's books, either, despite occasional feelings of love for his wife and always coming out of a situation all right, so he might be considered a Magnificent Bastard. There is the very occasional indication that Flashy doth protest too much, and, to be honest, in the situations he finds himself in, "being a coward" also counts as "being the Only Sane Man".

It's the nineteenth century, it's the British Army - very little of it is going to make sense.

Not to be confused with Choushinsei Flashman.

Tropes used in Flashman include:
Retrieved from "https://allthetropes.org/w/index.php?title=Flashman&oldid=1663210"
Categories:
Cookies help us deliver our services. By using our services, you agree to our use of cookies.