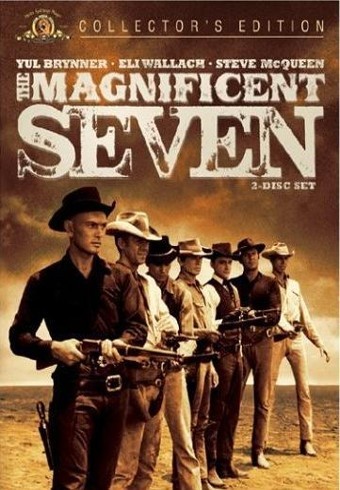 Vin: I guess right about now you kinda wish you'd given your crops to Calvera, huh?
Hilario: Yes. And no. Both at the same time. Yes, when I think of what he might do. No, when I remember the feeling in my chest this morning as I saw him running away -- from us. That's a feeling worth dying for. Have you ever... felt something like that?
Vin: Not for a long, long time. I, uh, I envy you.

Mexican villagers, plagued by a band of bandits, send a few of their number north to the border, to buy guns so they can defend themselves. They end up hiring seven gunmen to help them instead.

The Magnificent Seven is a western retelling (in both senses of the term) of The Seven Samurai (with a brilliant and memorable score, to boot). This film has so much testosterone that a girl risks getting pregnant just by watching it. It is widely considered one of the last great westerns, and was named to the National Film Registry in 2013.

Not to be confused with the 2016 remake, or the ensemble/plot The Magnificent Seven Samurai.

Chris: Morning. I'm a friend of Harry Luck's. He tells me you're broke.
O'Reilly: [chopping wood] Nah. I'm doing this because I'm an eccentric millionaire.

Harry: Well, there comes a time to turn Mother's picture to the wall and get out. The village will be no worse off than it was before we came.
Chris: You forget one thing. We took a contract.
Vin: Not the kind any court would enforce.
Chris: That's just the kind you've got to keep.