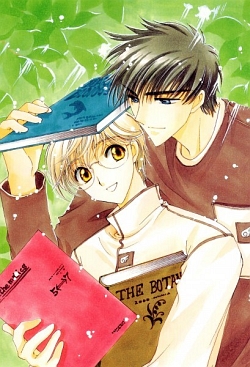 Yuki and Touya: not the main characters, still totally cute.

In the West, gay men rarely appear outside of works aimed at... well, gay men. One of the odder cultural quirks of Japan (though it is slowly bleeding over to the rest of the world) is the use of young, homosexual male relationships as Fan Service for the girls. Works that focus on these relationships form a genre currently known by the English term Boys' Love, also called Yaoi.

But even outside of actual BL series, hints of male-male romance are often thrown in to help the series appeal to other demographic groups. Depending on the series in question, this can be limited to Homoerotic Subtext... or not.

A Yaoi guy doesn't need to be a Bishonen, but there is a certain degree of overlap between the two character types. If there is a Yaoi Fangirl among the cast, she will try and invoke this trope.

See also Uke and Seme. For works where the male-male romance is the main dish rather than the garnish, see Boys Love Genre.

Has nothing at all to do with Yao Guai, thank goodness.

Examples of Yaoi Guys include:

Retrieved from "https://allthetropes.org/w/index.php?title=Yaoi_Guys&oldid=1871256"
Categories:
Cookies help us deliver our services. By using our services, you agree to our use of cookies.